Does The Senate Have To Vote On A SCOTUS Nominee? Nope 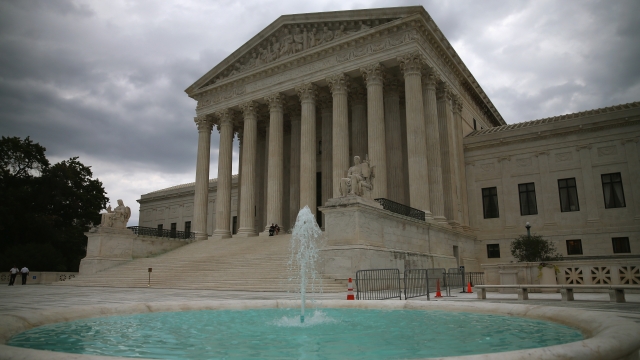 SMS
Does The Senate Have To Vote On A SCOTUS Nominee? Nope
By Eugene Daniels
By Eugene Daniels
February 15, 2016
What's the Senate constitutionally obligated to do when there's a vacancy on the Supreme Court? We asked an expert.
SHOW TRANSCRIPT

"I do not believe the president should appoint someone," Sen. Marco Rubio said about President Obama filling the newest vacancy on the Supreme Court.

"I fully agree that we should not allow a judge to be appointed during his time," Dr. Ben Carson agreed.

"I think its up to Mitch McConnell and everybody else to stop it. It's called delay, delay, delay," Donald Trump said the president will probably appoint someone, but the Senate should never.

The Constitution says, "[The president] shall nominate, and by and with the advice and consent of the Senate, shall appoint ... judges of the Supreme Court, and all other officers of the United States."

Presidents and the Senate have interpreted the "advice and consent" clause differently since the beginning of the Republic.

We sat down with Dr. Marvin Overby of the Kinder Institute on Constitutional Democracy who said: "George Washington essentially said: ‘I don’t want your advice. I just want your consent or not.' That is generally the way presidents have interpreted it."

"The Senate's duty is to advise and consent. You know what? The Senate is advising right now. We are advising that a lame-duck president in an election year is not going to be able to tip the balance of the Supreme Court," Sen. Ted Cruz said on Meet the Press.

"I think Sen. Cruz is correct. The Senate is under no constitutional obligation to consider a nominee sent forward for any position, much less the Supreme Court," Overby said.

"It’s not rare thing for the Senate to say, 'No.' Something like 20 percent of all nominations that have been put forward since the 1790s have been rejected. What would be more uncommon, if this develops this way, is to let a nomination languish without any action on it for a full 300 and something days," Overby added.

So the question is not a constitutional one. It's a political one: What are Republicans in the Senate willing to risk to make sure a conservative justice is the next appointee?

"If I had to put money on it, I would say in the short run this is going to help certain of the Republican nominees as they go through the primary process of appealing to their base. In the general election, it’s a far dicier proposition," Overby said.

This video includes images from Getty Images and The U.S. National Archives and Records Administration and video from CBS and NBC.