Does Greece's Debt Crisis Compare To Anything In History? 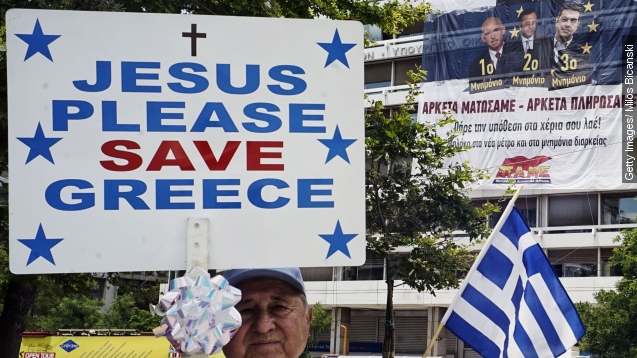 SMS
Does Greece's Debt Crisis Compare To Anything In History?
By Matt Patston
By Matt Patston
June 16, 2015
Greece is up a debt creek without a monetary paddle, and it's got the rest of Europe sweating. What can we learn from other sovereign defaults?
SHOW TRANSCRIPT

As Greece wanders closer to a default on its debt and a potential exit from the Eurozone, the economic future for the country and the continent seems uncertain.

For clues about what might happen to Greece, we turn to other countries that have defaulted in recent memory. (Video via The Telegraph)

First: Argentina. That country's debt crisis in the early 2000s has been trotted out as a comparison to Greece's troubles over the past five years.

And the two crises do share some roots: Both were born out of an increase in government borrowing and a decrease in tax revenues — brought on by rampant tax evasion and corruption. Unemployment in both countries soared, and the debt piled on. (Video via RT)

But in Argentina, after civil unrest caused its president to flee the country by helicopter, the country actually emerged fairly gracefully from that crisis and had more or less recovered by 2005. (Video via International Labour Organization)

A number of other Latin American countries defaulted throughout the decade: Ecuador, Paraguay, Venezuela — the list goes on. Argentina even defaulted again in 2014, marking the region's chronic debt instability.

But before Greece revealed the leaks in European finance, the continent had stayed much cleaner than Latin America; the region's most significant default before Greece was Russia's in 1998.

That crisis was brought on by declining production, hyperinflation and plummeting oil prices. But like Argentina, Russia recovered quickly. A rebound in the energy market, which drives most of Russia's exports, pulled the country through the crisis. (Video via The Financial Times)

A Greek default will likely be a bit more messy. Because the rest of Europe has a stake in Greece's finance, the debt restructuring has higher stakes, especially for the other countries teetering on bankruptcy themselves.

Anyone can offer advice or predictions for Greece's future — but the guessing game is complicated. Greece's entrenchment in a shared currency makes its default unprecedented, so anything could happen.

A default would likely trigger a run on Greek banks, which would either mean withdrawal restrictions or sweep the legs out from under the whole fragile system, leaving the country with no money for anyone to pay anyone. (Video via RT)

And because a default would likely mean an exit from the Eurozone, Greece would pretty much be starting from scratch with its former currency, the drachma, which would be immediately prone to hyperinflation.

Negotiations between Greece and creditors broke down Sunday. The country is demanding more bailout funds and fewer austerity restrictions, which have kept the country's budget in a chokehold since 2010. (Video via The Financial Times)

The rest of Europe is in a sticky spot: If they let Greece default, it could shake confidence in the entire European bond market and trigger a panic that could hurt every country involved.

But if Greece gets away with a bailout and fewer austerity measures, it could send the wrong message to other unstable countries — like Portugal and Spain — that they can do whatever they want and still get bailed out. (Video via Sky News)

This complex web of consequences is what makes Greece's situation so difficult to compare to other defaults, like those in Latin America. To some extent, the Eurozone is one body, and Greece is an infected finger. (Video via Bloomberg)

So the rest of the Eurozone now faces a choice: Cut the finger off or spend billions of dollars on antibiotics.

This video includes photos from Getty Images and music from @nop / CC BY NC 3.0.