Does Cavaliers Ad Reveal A Blind Spot To Domestic Violence? 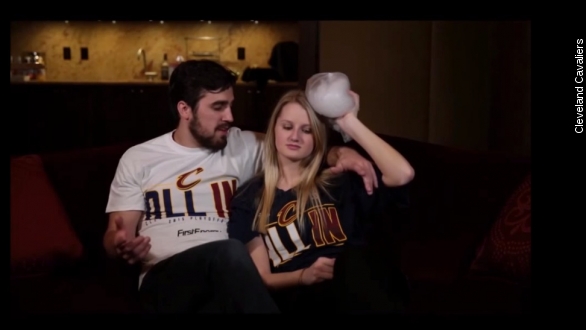 SMS
Does Cavaliers Ad Reveal A Blind Spot To Domestic Violence?
By Jasmine Bailey
By Jasmine Bailey
May 7, 2015
During the second round of the NBA playoffs, the Cleveland Cavaliers ran an ad that critics say makes light of domestic violence.
SHOW TRANSCRIPT

From cheers to boos. Right after the Cleveland Cavaliers beat the Chicago Bulls in game 2 of their second-round playoff series, support for the team has dwindled, at least when it comes to advertising.

"Bulls fan? I didn't know you were a Bulls fan. ... I thought you were all in," says a male Cavaliers fan in a promotional ad.

"Well, I'm all in now, let's watch the game," says the woman in the commercial.

The spoof of a scene from "Dirty Dancing," which played on the Jumbotron during Wednesday's game, was meant to be funny, but including a domestic violence angle wasn't the best idea.

Especially coming from the sports world, where high-profile domestic violence cases have made headlines over the past year.

So how could the Cavs release such a tone-deaf ad and not expect backlash? Your guess is as good as ours, but they did release a statement Thursday acknowledging the mistake.

It said in part: "We sincerely apologize to those who have been affected by domestic violence for the obvious negative feelings caused by being exposed to this insensitive video. The Cavaliers organization has a strong and lengthy track record of supporting domestic violence-related causes and efforts."

One of the board members for Cleveland's Domestic Violence & Child Advocacy Center works for the Cavaliers.

​According to the Cavaliers directory, David Painter is manager of the team's training facility.

So he might not have had a say in the ad, but if the team has ties to a domestic violence advocacy group, you would think there would be more of an atmosphere of sensitivity.

And that seems to be a problem when it comes to a number of advertisements. Bud Light is still recovering from an arguably tone-deaf slogan it displayed on its bottles. (Video via Bud Light)

The slogan: "The perfect beer for removing 'no' from your vocabulary for the night."

"Maybe what they were trying to go for here didn't work because it touched a nerve. A lot of commenters saying it sends the wrong message, especially in light of recent campus rape incidences," ABC reports.

The slogan was quickly removed from Bud Light bottles and an apology was released. The Cavaliers have also since taken down their video.

But some are calling for the people responsible for the ad to be fired.

This video includes an image from Getty Images and Ichcha Bharadwaj / CC BY SA 4.0.