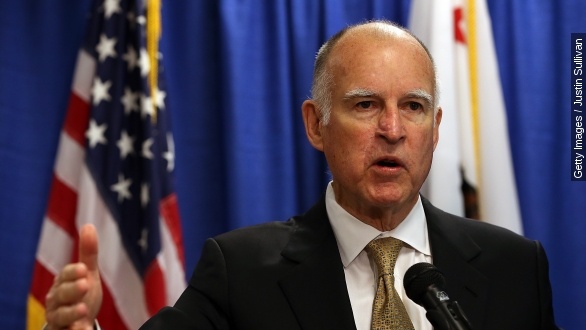 “We’re standing on dried grass, and we should be standing on five feet of snow ... As Californians, we have to pull together and save water in every way we can," Governor Brown said.

The announcement comes after a record-breaking warm and dry winter, which wiped out many of the snowpacks that normally provide 75 percent of California's water supply in the summer months.

"Reservoirs across the region are running on empty, as seen in this drone video documenting bone-dry record breaking conditions," NBC reported.

Compounding the problem is that before this winter, California was already in bad shape: Climatologists say the state is in the midst of the region's worst drought in 1,200 years. (Video via PBS NewsHour)

In the past, the government responded to droughts by requesting, but not mandating, water use reductions. This year, for the first time ever, it's not a choice: Water utilities have been ordered to cut consumption by 25 percent.

And while that will mean shorter showers and browner lawns for millions, ordinary Californians don't actually use most of the water.

That distinction belongs to California's agriculture industry, which composes 2 percent of the state's economy but consumes 80 percent of its water. (Video via Vice News)

In other words, California's almonds consume twice as much water as the cities of San Francisco and Los Angeles combined. And although California's farmers have to report their water usage to the state, they're not restricted by Governor Brown's new order. (Video via California Department of Food and Agriculture)

"A grower like myself ... this is a heartbreaker," said farmer Bill Diedrich.

But whether or not these new restrictions are getting to the root of the problem, they raise a big question for Californians: How far should the government go to punish citizens who exceed their quotas?

On one hand, no one's ever been locked up for overwatering their lawn. On the other hand, a historic drought might end up calling for more historic measures. When asked if people would be jailed for violating water restrictions, a government spokesman said, "I can imagine that it might happen."