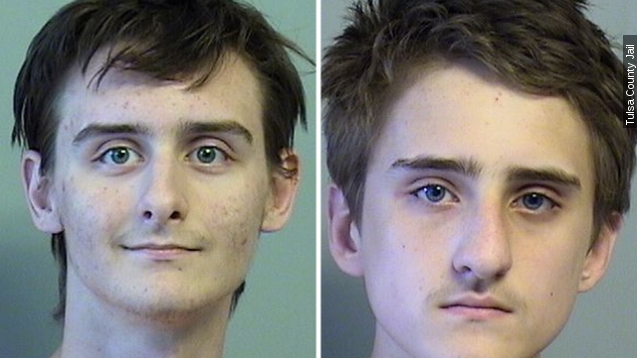 SMS
Documents Released In Bever Quintuple Murder Case
By Katherine Biek
By Katherine Biek
August 7, 2015
Documents have been released in the case against teens Robert and Michael Bever, who are charged with murdering five of their family members July 22.
SHOW TRANSCRIPT

New documents have been released in the case against the Bever brothers, who are charged with murdering five of their family members in Broken Arrow, Oklahoma.

The oldest Bever children, 18-year-old Robert and 16-year-old Michael, are charged in the deaths of their parents and three of their siblings inside their home July 22.

The brothers are also charged with assault and the intent to kill their 13-year-old sister, who was found alive at the scene. A 2-year-old sister was found unharmed in the house. (Video via KJRH)

The documents, released by the city of Broken Arrow, detail the direct aftermath of the murders, including notes made by a 911 operator after someone inside the Bever home made an emergency call around 11:30 p.m.

The notes show the call ended less than a minute after it was placed. An operator attempted to call back, but the line went straight to voice mail. Police officers arrived on the scene about 10 minutes after the initial call.

Newsy's partners at KJRH report the 49 pages of documents were released to the public after a Tulsa County judge ruled against the Bevers' defense attorneys, who requested they be sealed.

Tulsa World also reports a search warrant filed Thursday said, "One of the older siblings 'spontaneously uttered' that their plans — which remain unspecified — were on a computer thumb drive inside one of the bedrooms."

Both Robert and Michael Bever pleaded not guilty to the five counts of first-degree murder and one count of assault and battery with an intent to kill at their arraignment Monday. A preliminary hearing is set for Oct. 28.