Doctors Without Borders: US Attack Deliberate, Without Cause 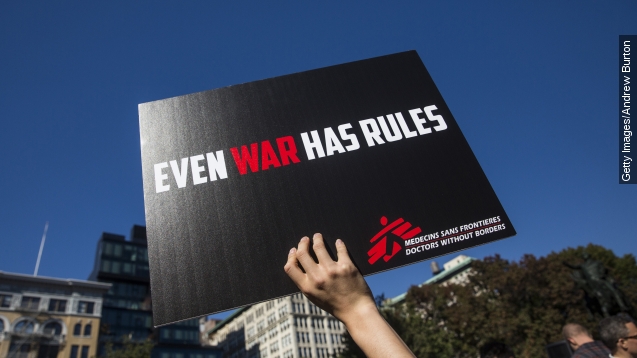 Doctors Without Borders has been investigating the U.S. bombing of an Afghan hospital, and an initial report from the group says there was no reason the hospital should have been targeted.

According to the investigation, the hospital was under the full control of Doctors Without Borders and adhering to its no-weapons policy.

Through interviews with staff and email and telephone records, the investigation found there wasn't any fighting around the hospital and doctors were catching up on the backlog of surgeries before the airstrike started.

Doctors Without Borders says the U.S. military was provided with coordinates of the compound ahead of time; those coordinates centered in front of the main hospital building, which is where the majority of the damage occurred. Most of the other buildings were untouched in the strike.

According to staff eyewitness statements, people were being shot from the air as they attempted to flee the main building. Thirty people were killed during the attack.

In the days leading up to the airstrike, the hospital confirmed to U.S. officials it was treating about 20 patients who were part of the Taliban.

The international president of Doctors Without Borders said in a statement, "The question remains as to whether our hospital lost its protected status in the eyes of the military forces engaged in this attack -- and if so, why."

The U.S. government has apologized for the attack and is conducting its own investigation. Three other investigations are also underway.

The Doctors Without Borders investigation is ongoing, but the organization calls for international law for hospitals in conflict areas to be respected.