Doctors Can Now Diagnose Concussions With Just A Blood Test 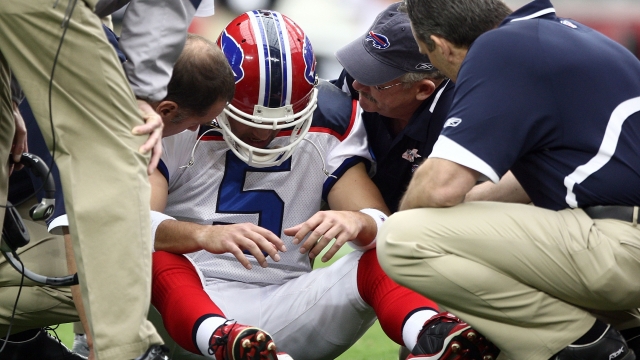 SMS
Doctors Can Now Diagnose Concussions With Just A Blood Test
By Grant Suneson
By Grant Suneson
March 28, 2016
A study found the brain releases a protein into the bloodstream after it's injured. Doctors can now detect that protein to diagnose concussions.
SHOW TRANSCRIPT

Concussions are one of the thorniest issues facing sports today. But an Orlando, Florida, doctor may have just changed the game of how head injuries are diagnosed.

A new study in the Journal of the American Medical Association Neurology shows there’s a protein released into your bloodstream after a head injury, and doctors can detect it up to a week later.

This is huge news because, unlike most other injuries, doctors mostly rely on the person experiencing the concussion to relay their symptoms. Doctors can order a CT scan to check for brain injury, but they generally try to avoid it.

"You really want to minimize the amount of CTs that you do on your patients, particularly children, because they are a lot more sensitive to radiation and the bad side effects," Dr. Linda Papa said.

The blood test has no such side effects. Not to mention it’s about as accurate as a CT scan and could provide a much cheaper alternative.

Making concussions easier to diagnose can help doctors treat them and stave off lingering effects, like dizziness, memory loss and depression, especially since symptoms don't always appear right away.

Researchers hope the test will help doctors treat kids who have a hard time explaining their symptoms. But it could also help diagnose athletes who are intentionally keeping their symptoms a secret.

Currently, the NFL has players take a memory test before the season. They take a similar test after a suspected head injury. If their second score is worse than their first, the player is diagnosed with a concussion and is forced to sit out until they’re better.

But that may not be the most effective method. Several former players, including Peyton Manning, have admitted to intentionally scoring low on the first test so they won’t have to risk sitting out.

It would be considerably harder to fake a blood test. Doctors hope the test will someday be as simple to use as a diabetes blood sugar test.

This video includes clips from Orlando Health and images from Getty Images.