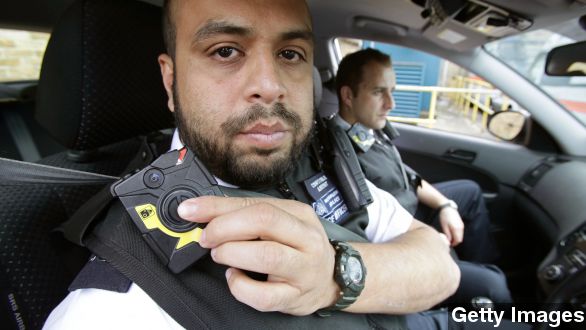 SMS
Do Police Body Cameras Work?
By Zach Toombs
By Zach Toombs
December 2, 2014
When body cameras were tested in Rialto, California, complaints against police almost disappeared. But the devices have to be used honestly.
SHOW TRANSCRIPT

Police body cameras often make for captivating — and sometimes disorienting — video. But can they solve a big problem for the U.S. justice system by taking the uncertainty out of he-said-she-said police encounters? (Video via Evansville Police Department)

"I"m going to be proposing new community policing initiatives that will significantly expand funding and training for local law enforcement, including up to 50,000 additional body-worn cameras," President Obama said Monday. (Video via CNN)

The hope here is that cameras will reduce the number of violent law enforcement encounters because both the officer and anyone else involved knows the whole thing will be caught on camera.

So, what does the research say? Surprisingly, there's very little of it out there, but it is promising.

Half the police force in Rialto, California wore body cameras in 2012 as part of a study by the force's chief and the University of Cambridge. The results? A drop in complaints, from 28 the year before, to three. And use of force by police was cut in half. But the sample size was small: only 27 officers wore cameras.

Body cameras are often touted for their ability to protect officers, like in New Mexico, when a suspect wrongfully accused an officer of sexual harassment.

"The whole thing's on video ma'am. You can say whatever you like," the officer said.

In Sunbury, Ohio, thousands of dollars in court proceedings and complaint filings were saved thanks to body cameras that provided unique evidence. A lieutenant told The Columbus Dispatch, "This camera’s gonna save you. It’s not gonna hurt you.”

But, of course, the cameras have to be used correctly and honestly. An officer was fired after shutting off his camera during this incident — which left a woman beaten and missing teeth. (Video via WKMG)

Some police unions, like the St. Louis Police Officers Association, have expressed concern about using cameras to monitor law enforcement.