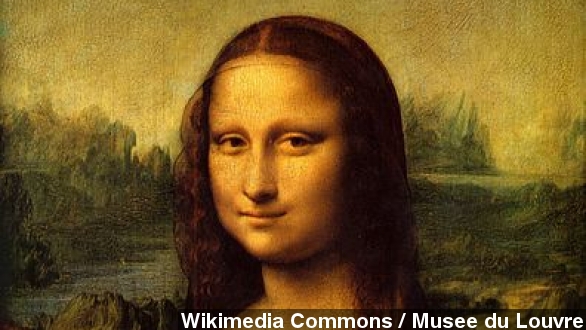 By Lauren Zima
February 18, 2014
Researchers are working to see if a skeleton could be that of the woman who modeled for Leonardo da Vinci's famous painting.
SHOW TRANSCRIPT

For centuries, she's been smiling at us. Maybe thinking, 'you have no idea who I am'?

Mona Lisa. Well, researchers trying to identify the woman who modeled for Leonardo da Vinci's famous painting may have come across a critical clue. (Via Wikimedia Commons / Musee du Louvre)

Fox News reports researchers have started DNA tests on a skeleton found in a church in Florence, Italy.

What they're trying to do is link the skeleton to other recently discovered bones — bones believed to be belong to the model's descendants.

This is all based on the theory that the model for Mona Lisa was Lisa Gherardini, a noblewoman who lived near da Vinci. (Via euronews)

And as The Wall Street Journal reports, if the DNA tests are positive, if this skeleton is Gherardini, the researchers plan to make a computer-generated reconstruction of her face.

And that could solve an age-old mystery. Who is the woman behind the smile? The DNA results are expected by May or June. (Via Wikimedia Commons / Musee du Louvre)

Still, some speculate da Vinci could have used several models over a period of years for the painting. In which case — might need to get Dan Brown on the phone or something.