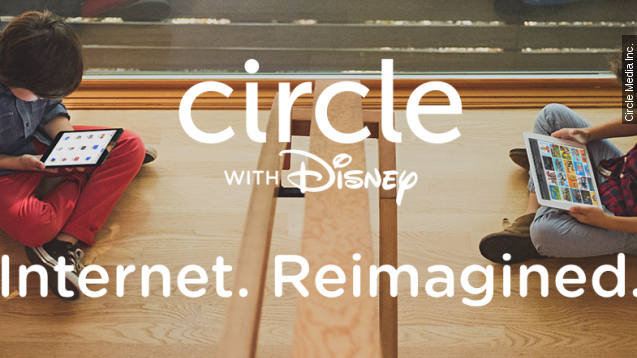 SMS
Disney Partners With Circle On Parental-Controls Device
By Samantha Crook
By Samantha Crook
November 5, 2015
Disney has partnered with tech company Circle on a device that lets parents control their kids' Internet use.
SHOW TRANSCRIPT

Disney has partnered with "family-centric" tech company Circle to make a device that controls your kids' Internet use. (Video via Circle Media Inc.)

Circle with Disney, as the product is called, certainly isn't the only parental control device out there. But backing from a household name in children's entertainment does set it apart.

Circle actually failed to meet its funding goal in a 2013 Kickstarter campaign. (Video via Kickstarter)

Through the partnership with Disney, Circle now comes with curated, age-specific Disney content like blogs, videos, games and music.

Aside from the Disney partnership, what makes Circle different from other parental controls is that it doesn't require confusing Internet settings and software or a specific Wi-Fi-enabled device. (Video via NETGEAR, Amazon)

Once Circle connects to your home's Wi-Fi, parents can control how different people on the network use the Internet through the iOS app. The app controls things like how much time a child can spend on different sites and spits out information about how much time is spent where.

One concern with the device that's been brought up by multiple tech outlets is data security. Wired suggested the familiarity of Disney could help ease any user concerns about what the company does with user information.