Disney Getting Down To Business With Live-Action 'Mulan' 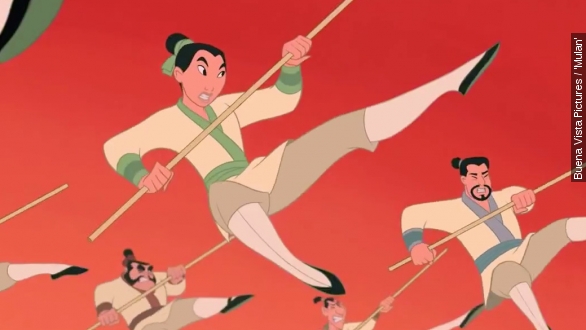 SMS
Disney Getting Down To Business With Live-Action 'Mulan'
By Jay Strubberg
By Jay Strubberg
March 31, 2015
"Mulan" will soon be wielding her sword on the big screen in non-cartoon form, adding to a string of other Disney live-action adaptations.
SHOW TRANSCRIPT

Yet another live-action adaptation of a popular Walt Disney film is coming our way! "Mulan" will soon be wielding her sword on the big screen in non-cartoon form.

According to The Hollywood Reporter, "Disney bought a script by writing team Elizabeth Martin and Lauren Hynek that centers on the ... female warrior who was the main character in Disney's 1998 animated film." Few other details are known at this point.

The "Mulan" reboot follows a string of other famous Disney films trading cartoons for real humans, including "Alice in Wonderland" ...

"The ragged servant girl is what you are, and that is what you will always be," Lady Tremaine said.

"Cinderella," which has already pulled in more than $330 million worldwide since its release in mid-March.

... and, "Beauty and the Beast", which was just announced in January. It will star Emma Watson as Belle and is expected to hit theaters in 2017.

In addition to adding yet another live-action remake to the Disney archives, a writer for The Wrap says it also bodes well for Disney's diversity, and that the retelling will likely have a strong foothold in Asian markets.

After all, the original 1998 film raked in $300 million worldwide. Talk about getting down to business.

Expect even more live-action adaptations from Disney. Along with "Beauty and the Beast" and "Mulan," the studio also has remakes of "Jungle Book" and "Dumbo" in the pipeline.