Disney Channel Is Getting All Wrapped Up In 'Tangled' 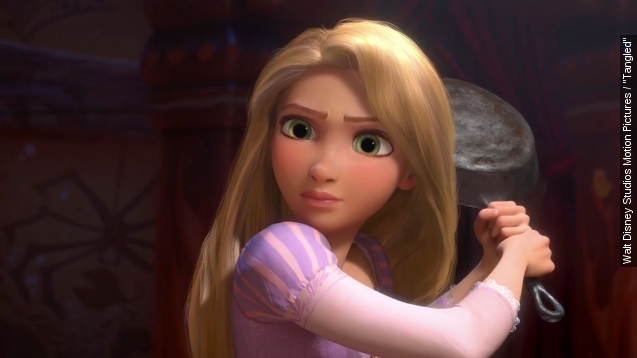 SMS
Disney Channel Is Getting All Wrapped Up In 'Tangled'

By Katherine Biek
June 4, 2015
Disney Channel is bringing the movie "Tangled" to the small screen in a new animated series.
SHOW TRANSCRIPT

"Let down your hair!"

The movie "Tangled," based on the story of Rapunzel, is headed to the Disney Channel in the form of a new television series. Hope everyone has their frying pans ready.

Disney is definitely sticking to its plan of taking some of their most successful animated movies and fine tuning them for the small screen.

"Jake and the Never Land Pirates" is based off the 1953 movie Peter Pan and surrounds three young pirates hand-picked by Peter to protect Neverland. It's currently running on Disney Junior, which is like the Disney Channel, but for children under the age of eight.

In 2014, Disney XD debuted "The 7D," which is an animated series based off "Snow White and the Seven Dwarfs." Even though these dwarves look absolutely nothing like the ones we first met back in 1937.

And Disney is working on a new show called "The Lion Guard," which will star the son of Simba and Nala from 1994's "The Lion King." It'll premiere in 2016.

Even though Disney already made a movie about Simba and Nala's daughter, Kiara. (Video via Buena Vista Home Video / "The Lion King 2: Simba's Pride")

In the past, Disney has also done TV series for "The Little Mermaid" and "Aladdin," as well.

Tangled is definitely the most contemporary movie Disney has adapted. It opened in theaters in 2010.

But it's not a surprise Disney turned to its long-haired heroine seeing as how the film grossed almost $592 million worldwide at the box office, won a Grammy for best original song and was nominated for an Oscar.

Disney even took the time to make a short film titled "Tangled Ever After" in 2012, and is working on adapting the movie for a stage show to star on its cruise line in November.

One thing that'll make the Tangled TV series stand out from the others, though, is that the original gang is getting back together.

And Alan Menken, who was the composer for the original movie, is back to create new music specifically for the show.

Unfortunately, it'll still be a while until we learn what new adventures Rapunzel and Eugene will be getting themselves into. The series will debut in 2017.