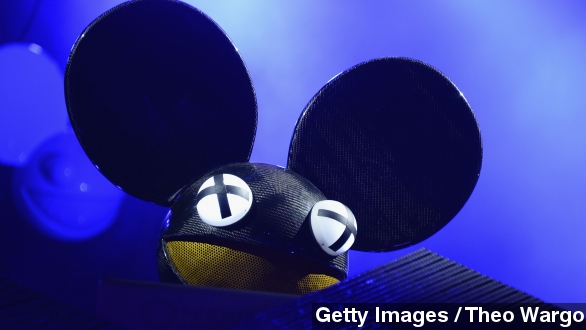 The Disney empire can be magical and cuddly to some, but they don't play when it comes to legal issues regarding one of their oldest, most popular cartoon characters.

The Walt Disney Company filed an objection this week to prevent EDM producer Deadmau5 from trademarking his dead mouse logo — which the company says bears too great a resemblance to Mickey Mouse.

According to the U.S. Patent and Trademark Office, Deadmau5, whose real name is Joel Zimmerman, submitted a filing Aug. 18 to trademark his logo in the U.S. It includes a description: "The mark consists of a caricature of a mouse head with the letter "X" over each eye and the word, in a stylized format, 'deadmau5' centered beneath the mouse head."

But according to Variety, that's a little too close for Disney. The company hit back against Deadmau5's filing, saying his logo "is nearly identical in appearance, connotation and overall commercial impression to Disney’s Mouse Ears Marks. ... Both parties marks are comprised of a round head with prominent round mouse ears in silhouette."

Billboard reported back in April Disney was investigating Deadmau5's trademark attempt, and now it looks like the company is making its move.

Just to be clear, Disney isn't suing deadmau5 — they haven't even issued a cease and desist letter. The company is trying to prevent deadmau5 from trademarking his image in the U.S.

According to one Daily Beast writer — who says he'd like to see the two parties "have it out" — this case is probably about money. He writes, "If Deadmau5 and Disney can work on some kind of a payment arrangement, this suit might just go away."

In a statement, Deadmau5's attorney said her client has been using the logo for the past 10 years without incident and has even secured trademarks in 30 other countries.

Deadmau5 himself even touched on the likeness between his logo and Mickey in 2012, telling Rolling Stone, "Someone at the Disney patent office fell asleep on that one."

As for this most recent dispute, the music producer tweeted, "Disney thinks you might confuse an established electronic musician / performer with a cartoon mouse. That's how stupid they think you are." He said in another tweet, "lawyer up mickey."

Looks like this legal dispute won't be ending any time soon. Variety reports Deadmau5 has until Oct. 12 to respond to Disney's objections.