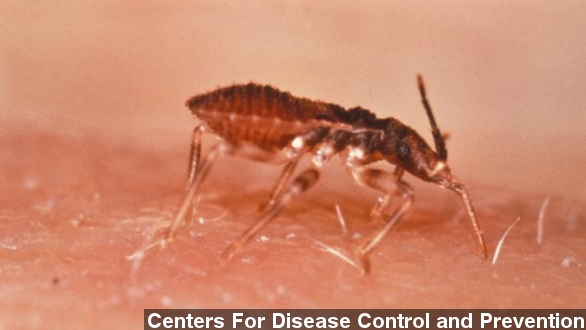 If you're one of the people freaked out by Ebola, here's another thing to potentially freak out about. "Kissing bugs" may be spreading a rare disease in the U.S.

Trypanosoma cruzi, or "kissing bugs" as they're better known, crawl on people's faces at night and suck their blood.

And there's more. The bugs are spreading a disease called Chagas, which can lead to heart problems and intestinal complications.

The Centers for Disease Control and Prevention  says Chagas occurs primarily in rural areas of Latin America and in recent years has been showing its face in the U.S.

While much of the outbreak in Latin America has to do with the kissing bugs, the CDC believes most U.S. cases occur from a patient visiting an affected country or from mother-to-baby, blood transfusions and organ transplants.

However, researchers from Baylor College of Medicine in Houston found 36 percent of the 17 Texas blood donors who tested positive for Chagas appeared to have contracted it from the kissing bugs. The team also found several bugs in the area carrying the disease, although no direct correlation has been made.

Chagas researcher Nolan Garcia said, "Physicians should consider Chagas when patients have swelling and enlargement of the heart not caused by high blood pressure, diabetes or other causes, even if they do not have a history of travel."

The World Health Organization says Chagas presents in two phases. In the acute phase, a large amount of parasites circulate in the blood. Some people show no symptoms at all, while others may have fever, headache and chest pains along with other symptoms.

In the chronic phase, the parasites are mainly in the heart and digestive muscle. Around 30% of patients suffer from a heart disorder and 10% suffer from a digestive disorder.

When discovered early, Chagas can be treated with medication. As with most illnesses, doctors say the earlier you catch it the better.