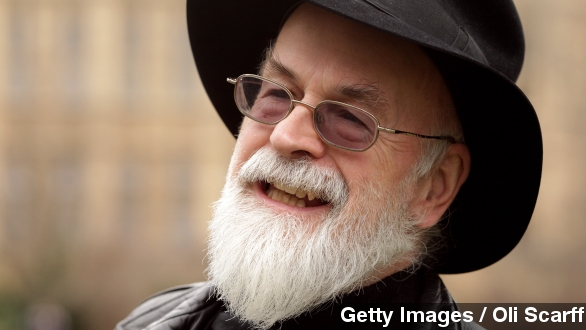 Renowned fantasy author Terry Pratchett has died at the age of 66.

Pratchett wrote more than 70 books over the course of his career and continued writing even after being diagnosed with a rare form of Alzheimer's disease in 2007. (Video via Trinity College Dublin)

He was best known for his satirical "Discworld" series, which he first published in 1983, and had more than 40 installments in the series. (Video via The Guardian)

The managing director of Transworld Publishers announced Pratchett's death on his website Thursday saying: "Terry enriched the planet like few before him. As all who read him know, 'Discworld' was his vehicle to satirize this world: He did so brilliantly, with great skill, enormous humor and constant invention."

Pratchett continued writing even after his diagnosis and published his last book, "Raising Steam," in the summer of 2014.

He turned his diagnosis into an opportunity to raise awareness about the disease.

A spokesman for the Alzheimer's Society told CNN, "His vehement determination to reduce the stigma of dementia meant he helped drag it out of the shadows -- kicking and screaming at times."

Pratchett's Twitter accounted tweeted a goodbye to Pratchett in the voice of one of his characters, "Terry took Death's arm and followed him through the doors and on to the black desert under the endless night." and finally, "The End."

Pratchett is survived by his wife and daughter.