Discovery Of 'Dragon' Dinosaur In China Could Explain Myths 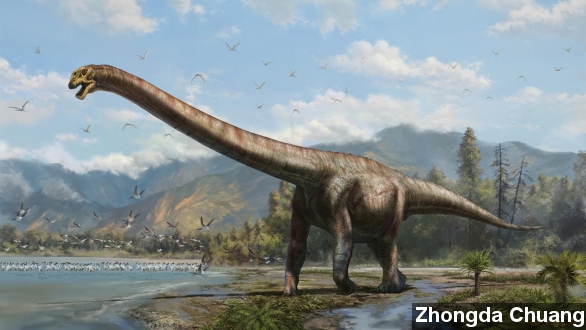 Feast your eyes on China's "dragon" dinosaur. It roamed the earth 160 million years ago, during the Jurassic Period.

"A member of the research team from the University of Alberta ... told CNN it was named Qijianglong, the 'dragon of Qijiang,' because farmers thought the bones resembled the shape of Chinese mythical dragons."

One researcher wondered if ancient Chinese actually found the remains and used them as inspiration for legends of dragons.

The dinosaur was 50 feet long with a neck length of around 25 feet — half its total body length.

It reminds us of another well-known dinosaur, the Brachiosaurus, which also had a long neck — about 30 feet long, according to LiveScience.

Both of these species are Sauropods, which explains their resemblance.

Like something straight out of Jurassic Park. (Video via Universal Pictures / "Jurassic World")

A press release quotes one of the University of Alberta paleontologists who made the discovery. PhD student Tetsuto Miyashita says: "Qijianglong is a cool animal. If you imagine a big animal that is half neck, you can see that evolution can do quite extraordinary things."

He added, "It is rare to find a head and neck of a long-necked dinosaur together because the head is so small and easily detached after the animal dies."

Although the long-necked dino was discovered in 2006, the findings were just published in a journal this month.

This video includes artwork from Zhongda Chuang and an image from Shenna Wang.