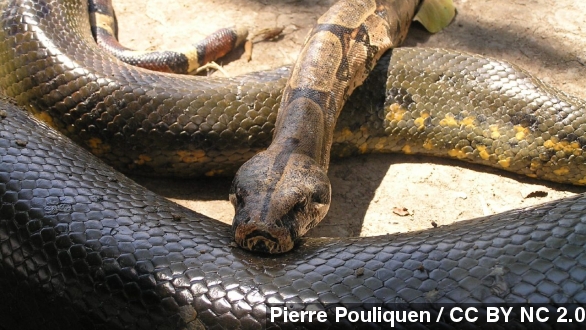 By Sebastian Martinez
December 8, 2014
Sunday night's "Eaten Alive" special, for better or worse, didn't deliver what it promised, and pretty much no one is happy with Discovery.
SHOW TRANSCRIPT

On Sunday night Discovery aired a show called "Eaten Alive" ostensibly documenting one man's efforts to be consumed by an anaconda.

But that didn't really happen, and the man, Paul Rosolie, was constricted, but never really ingested. (Video via Discovery Channel)

So to answer a question "Today"'s Matt Lauer posed to Rosolie last week ...

"They don't tell you how the tight-rope walker makes it across. You've got to watch on Sunday," Rosolie responded.

… He never really got in.

Answering the question of why Rosolie did it in the first place, he says it was in the interest of conservation.

It's never explicitly said where Rosolie's encounter with the snake took place, aside from southeastern Peru, but Rosolie wrote a book about his experiences in the Madre de Dios region of the Amazon rainforest. (Video via Google)

Rosolie says he hopes the stunt will draw attention to deforestation in the area, driven by illegal mining and logging.

"I want to do something that'll just grab people's attention," he told "Today."

And it certainly has grabbed people's attention, but nobody's really talking about deforestation — they're mostly just upset that he wasn't eaten.

BuzzFeed captured the absurdity of that sentiment, writing, "Viewers were bitterly upset that a human being wasn't actually eaten alive by a giant snake for their entertainment."

And Auburn University ecologist David Steen told Vox he was skeptical of the program's link to conservation, arguing, "Many people already fear snakes, I don't understand how trying to get eaten alive by one is going to help their reputation or their conservation."

Discovery Channel has been moving in the direction of what you might call tall tales for a while now, and Rosolie's experiences in Madre de Dios seem to fit the bill.

Among other claims, Rosolie says he's discovered a whole new ecosystem and once had an encounter with an anaconda that he says might have been the biggest snake in the world. (Video via YouTube / Paul Rosolie)

If that sounds a bit more like the words of, say, Robinson Crusoe than a conservationist, it's worth noting Rosolie's credentials are unclear at best — his website describes him as an author and a filmmaker, and much of it is focused on pushing his book.

This video includes music from Wake / CC BY 3.0.