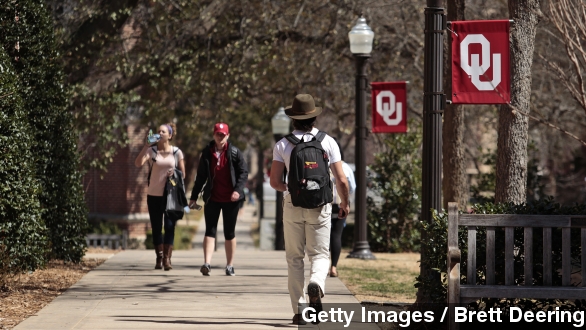 SMS
Disbanded SAE Chapter Considering Legal Action Against OU
By Ben Lawson
By Ben Lawson
March 13, 2015
The OU chapter of SAE is considering suing the school after the chapter was shut down over a video showing members leading a racist chant.
SHOW TRANSCRIPT

Two members of the group were expelled after a video of them leading a racist chant surfaced online.

"These people don't deserve to be called Sooners. They are misusing our name. These people are racists and bigots," he said. (Video via KOTV)

Now OU's chapter of SAE has hired attorney Stephen Jones and is considering its legal options.

Jones told KFOR the entire chapter has been branded as "racists and bigots" because of the actions of a few members.

Some legal experts say the students could potentially have a case on First Amendment grounds because OU is a public institution that takes public money.

The University of West Alabama's Will Nevin wrote on AL.com, "So, in effect, it's not a university punishing a student for a racist video or social media post, it is the state itself acting against an individual."

But the university could argue the students were in violation of its code of conduct. That policy bans abusive conduct "a reasonable person would find intimidating, harassing or humiliating."

Students marched in protest on OU's campus, and the university football team walked out of practice in silent protest earlier this week.

SAE's national leadership also closed down OU's chapter following the incident. The national organization is not planning any legal action against OU.