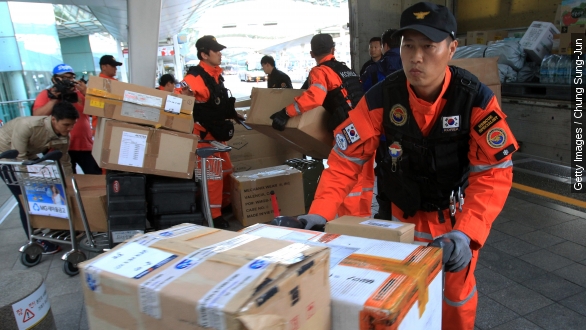 Nepal's need for disaster relief is as great as it's ever been, but, like many countries hit by natural disasters, it's struggling to keep up. (Video via Voice of America)

The United Nations says Nepalese authorities need to relax customs enforcement for aid organizations, because they're slowing the process of getting aid to those who need it.

And over the weekend, the airport in Kathmandu had to close its runways to large planes because of the wear and tear the volume of flights bringing aid has caused. (Video via CCTV)

Kathmandu's airport is relatively small, and doesn't usually see as much traffic as it has in the wake of the earthquake.

That's a problem the airport in Port Au Prince saw after Haiti's devastating earthquake in 2010, and the issue of customs in Nepal is something the U.N. had identified as early as 2007. (Video via CBS)

So some of the problems international aid has faced in Nepal aren't unique to this disaster, but as a writer for Fortune points out "Since every natural disaster plays out in an unpredictable and chaotic way, there is no sure-fire solution to easing the relief gridlock."

For that reason, being prepared for a disaster is paramount, but in that respect Nepal faces a problem that's affected many developing countries: political instability.

Despite being aware of the earthquake risks in the region, Nepal was preoccupied with transitioning from a monarchy in 2008, staging an election and creating a government, only to dissolve that government in 2012 and stage new elections in 2013. (Video via Al Jazeera, The Carter Center)

As one analyst told Deutsche Welle, "the fractured political situation since then has prevented substantial progress towards implementation of, for example, more rigorous governance of building practices or wide-spread public awareness activities."

And months before the earthquake, which has claimed the lives of more than 7,000 people, the country had seen protests and unrest over failure to find consensus on a new constitution for the country. (Video via ABP News)

So even as the government struggles to keep up with foreign aid, the biggest problems are ones that aid can't solve.