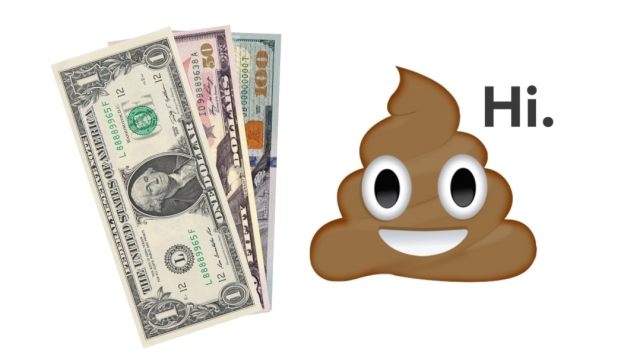 SMS
Dirty Money: The Cash In Your Pocket Probably Has Poop On It
By Leah Becerra
By Leah Becerra
May 20, 2016
We all knew money was gross, but it's unsettling to know exactly how gross it is.
SHOW TRANSCRIPT

Money is filthy. Depending on which study you read, the level of grossness may vary, but all researchers seem to agree — paper money is just straight up nasty.

Take this 2012 study from the Queen Mary University of London, for example. Researchers found 8 percent of credit cards and 6 percent of paper money had as much bacteria as the inside of a dirty toilet bowl.

More recently, researchers at New York University's Dirty Money Project analyzed genetic material on $1 bills. They identified some 3,000 types of bacteria, but the number of bacteria on the bills was actually higher — because a handful of the microorganisms hadn't been cataloged yet.

Research published in Biomedicine and Biotechnology said "the isolation of Shigella and Salmonella ... which indicated fecal contamination" was particularly concerning.

That same paper looked at a whole range of studies reporting bacterial contamination of paper money to be anywhere from 60-100 percent.

So, researchers are kind of all over the place when it comes to figuring out just how gross paper money is, but I think we can agree: Money is really f***ing gross.

This video includes images form Indygo / CC BY 3.0 and and Isabel Foo / CC BY 3.0. Music courtesy of APM Music.