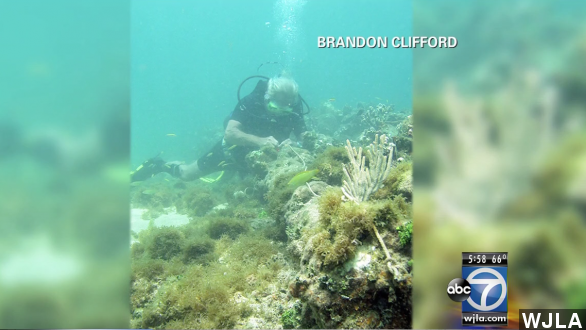 By Cliff Judy
May 13, 2014
A well-known underwater explorer believes he's found the remains of Christopher Columbus' flagship, the Santa Maria, off the coast of Haiti.
SHOW TRANSCRIPT

A well-known underwater explorer believes he's found the Holy Grail of shipwrecks. Sitting on the ocean floor for more than 500 years just off the coast of Haiti — possibly Christopher Columbus' Santa Maria.

WCPO ANCHOR: "If it is the Santa Maria, it would be one of the most significant underwater finds in history."

DIANA PEREZ, ABC ANCHOR: "They say the location and several other factors are right for it to be the fabled vessel and they believe it might be possible to actually salvage at least some parts of the remains and bring them to shore."

Barry Clifford is the explorer who believes he's tracked down the Santa Maria. Clifford is known for discovering the pirate ship Whydah in Cape Cod in 1984. (Via Science Museum of Minnesota)

Granted, Clifford has a lot to gain if researchers do end up agreeing with him that the shipwreck he's found is indeed the Santa Maria, but he says he has evidence to back his claim.

​Among the wreckage, Clifford says he found a cannon of 15th century design, making it difficult for the weapon to come from anything but Columbus' fleet.

He told CNN, "It is the Mount Everest of shipwrecks for me. This ship changed the course of human history."

Of the Nina, the Pinta and the Santa Maria, the Santa Maria was the largest and the flagship of Columbus' fleet to sail for the New World. (Via Fox News)

​The story goes on Christmas Day 1492, the sailors on duty fell asleep and left a cabin boy to steer the ship — something the admiral had strictly forbidden. When it ran up on rocks near Haiti, Columbus had whatever wood was salvageable used to build a fort. (Via 'The Loss of the Santa Maria​; Christmas Day 1492 by Arthur Davies)

Clifford told The Independent actually confirming the shipwreck as the remains of the Santa Maria will take a full excavation, and he's already contacted the Haitian government for permission to get started.

The History Channel bankrolled this project for exclusive rights to produce a major TV program on the possible discovery.