Did The Pope Ignore Iran's Persecution Of Christians During His Visit? 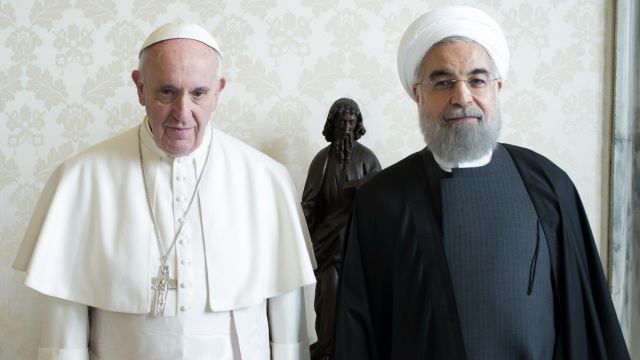 SMS
Did The Pope Ignore Iran's Persecution Of Christians During His Visit?
By Jake Godin
By Jake Godin
January 27, 2016
Iran's president visited the Vatican and spoke with Pope Francis — here's why that may have been an odd encounter.
SHOW TRANSCRIPT

It was the first time an Iranian president met a pope since 1999 when then-President Mohammad Khatami met Pope John Paul II.

The Holy See and Islamic Republic are actually on pretty good terms.

The pope voiced his support of the Iran nuclear deal last Easter, calling it a "definitive step toward a more secure and fraternal world." (Video via Vatican Television Center)

And Iran has a sizable Christian minority — estimates range from 117,000 to 450,000. Christians are granted some benefits under Iran's constitution, such as recognition as an official religion and guaranteed seats in the country's Parliament.

But Iran's also been accused by the United Nations of unfairly persecuting Christians and making arrests on charges like "acting against national security" and "forming groups to overthrow the government."

Saeed Abedini, an Iranian-American Christian pastor, was recently released after being imprisoned in Iran since 2012.

While Rouhani and Pope Francis did discuss religious freedom, it doesn't seem like much came out it.

During the 40-minute private meeting, the two also discussed Iran's nuclear program and how to diplomatically solve conflicts in the Middle East.