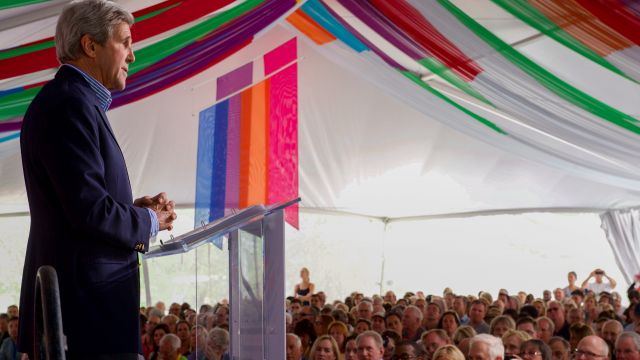 While speaking at the Aspen Ideas Festival in June, Secretary of State John Kerry said something that has others in the U.S. State Department "baffled."

"And there are a couple of subgroups underneath the two designated – Daesh and Jabhat al-Nusrah – Jaysh al-Islam, Ahrar al-Sham particularly – who brush off and fight with that – alongside these other two sometimes to fight the Assad regime," Kerry said.

The problem is those two groups, Jaysh al-Islam and Ahrar al-Sham, are Syrian rebel groups — the ones fighting against Syrian President Bashar al-Assad.

SEE MORE: This Is How Canada Has Managed To Resettle More Than 27,000 Syrians

Those two groups aren't the ones supported by the U.S. That's the Free Syrian Army and the Kurdish Popular Defense Units.

While the comment went unnoticed by many, The Washington Post took note. Two administration officials told the outlet that Kerry calling those organizations subgroups of ISIS and al-Nusra was wrong and "potentially harmful to U.S. government efforts to convince the Russians and the Syrian government not to attack them."

Russia has been trying to add Jaysh al-Islam and Ahrar al-Sham to the U.N. Sanctions List for ISIS, and Kerry lumping those groups together with ISIS fuels the Russian perspective. But as recently as late April, the U.S. State Department clearly opposed that.

"It's two opposition groups — Jaysh al-Islam, as you note, and Ahrar al-Sham. And they want to try to designate these groups that, frankly, are right now party to the cessation of hostilities," Deputy Spokesman Mark Toner said during a U.S. State Department daily briefing.

The Obama administration wants to work together with Russia on airstrikes against al-Nusra, but the U.S. needs assurances that Russia will stop attacking the U.S.-backed rebels and start pressuring Assad to do the same.

Did Secretary Kerry just misspeak? The U.S. State Department hasn't commented, but Kerry will be in Russia this week to discuss Syria and other issues.

This video includes images from the U.S. Department of State and Getty Images.