Did Melania Trump Plagiarize Michelle Obama's Speech? See For Yourself 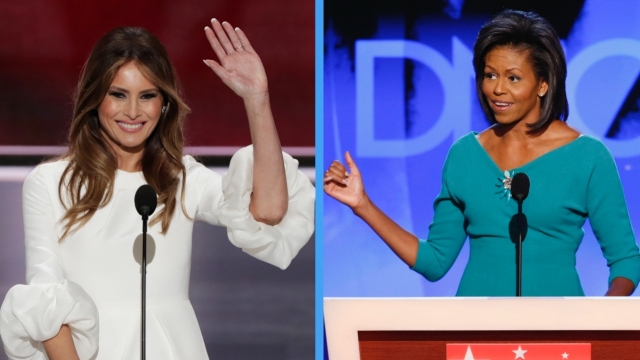 "From a young age, my parents impressed on me the values that you work hard for what you want in life," Melania Trump said during her speech at the Republican National Convention on Monday night.

"Barack and I were raised with so many of the same values, like you work hard for what you want in life," Michelle Obama said.

SEE MORE: Here's What That (Brief) RNC Delegate Revolt Was All About

"That your word is your bond and you do what you say and keep your promise," Trump continued.

"That your word is your bond and you do what you say you're going to do," Obama added.

"They taught and showed me morals in their daily life. That is a lesson that I continue to pass along to our son. And we need to pass those lessons on to the many generations to follow," Trump said.

"Barack and I set out to build lives guided by these values and to pass them on to the next generation," Obama added.

Melania Trump's much anticipated speech at the Republican National Convention did exactly what it wasn't supposed to do.

Instead of focusing on her husband's softer side, people are talking about whether she plagiarized part of Michelle Obama's 2008 Democratic National Convention speech.

The lines touch on some standard themes, but the similarities are pretty striking.

"Because we want our children in this nation to know that the only limitation to your achievements is the strength of your dreams and your willingness to work for them," Trump explained.

"Because we want our children and all children in this nation to know that the only limit to the height of your achievements is the reach of your dreams and your willingness to work hard for them," Obama said.

Before her speech, Melania Trump told NBC's Matt Lauer she wrote it "with as little help as possible."

SEE MORE: Donald Trump Had A Lot To Say Before Introducing His Running Mate

In response to plagiarism accusations, the Trump campaign released this sort of vague statement, "In writing her beautiful speech, Melania's team of writers took notes on her life's inspirations, and in some instances included fragments that reflected her own thinking."

"To think that she would be cribbing Michelle Obama's words is crazy. This is, once again, an example of when a woman threatens Hillary Clinton how she seeks out to demean her and take her down. It's not going to work," Manafort told CNN's "New Day."

Donald Trump tweeted: "It was truly an honor to introduce my wife, Melania. Her speech and demeanor were absolutely incredible. Very Proud! #GOPConvention"