Did LeBron Bully David Blatt? Some Reporters Think So 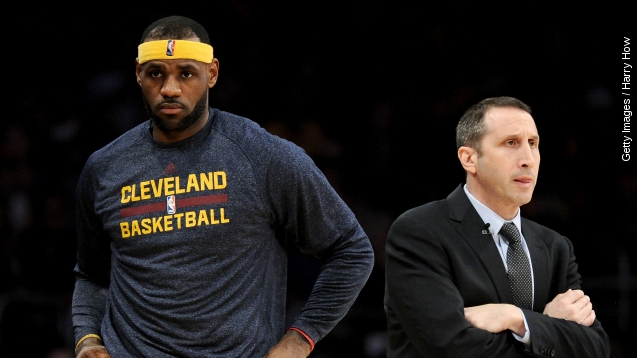 Yeah, there is no doubt about it. Cleavland Cavaliers head coach David Blatt is having a pretty bad week.

Not only did the Cavaliers fall to the Golden State Warriors in Game 6 of the NBA Finals Tuesday but then a column surfaced Thursday accusing LeBron James of "emasculating" his coach during the games.

ESPN's Marc Stein says LeBron would call timeouts himself, make substitutions and "openly bark" at Blatt over decisions he didn't like. (Video via Cleveland Plain Dealer)

"I can't remember too many examples of star players being that brazen in basicaly overruling the coach in front of his teammates," Stein said.

And of course, all sorts of outlets picked it up. Most focused on Lebron's behavior but a writer at Deadspin argues Blatt should have stepped aside and let Lebron take over.

ESPN NBA reporter Brian Windhorst, who's been following James for years, had this to say about the relationship between James and Blatt:

"He likes having Blatt to kick around," Windhorst said.

Not exactly a glowing compliment, but at least James likes something Blatt is doing.

Blatt didn't have much to say to reporters Thursday about the story, but when asked by a Cleveland Plain Dealer reporter, he said "It's a special opportunity to work with LeBron on a daily basis."

Moving forward to next year, the Cavs need to look at getting the other two big Cavs players healthy for the fall, Kyrie Irving and Kevin Love. Both of those players suffered season ending injuries during their playoff run.

All this being said, there really aren't rumors floating around that Blatt's job is jeopardy. After all, if your team goes to game six of the finals with two of your three stars on the bench, the system must not be that broken. (Video via NBA Coaches Association)