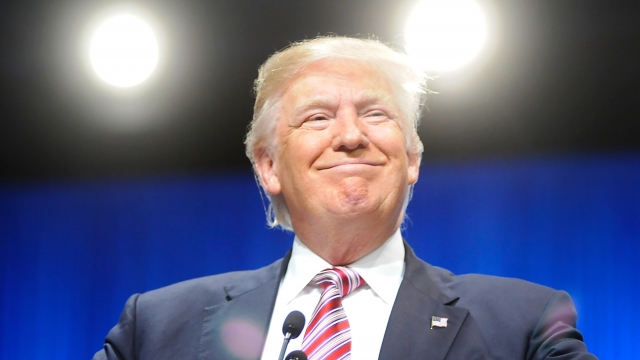 "Russia, if you're listening, I hope you're able to find the 30,000 emails that are missing. I think you will probably be rewarded mightily by our press," he said.

Trump took aim Tuesday at his opponent, Hillary Clinton, for having private email servers during her time as secretary of state.

The FBI decided against charging Clinton with a crime and said while there was evidence of statute violations, "no reasonable prosecutor would bring such a case."

In a press conference, Trump also addressed the hacking of the Democratic National Committee's servers, which resulted in WikiLeaks releasing of more than 19,000 emails, and whether he thinks Russia was responsible. Some have speculated the Russians — if they did it — did so to influence the presidential election.

"Honestly, they have no idea if it's Russia. It might be Russia. But if it's any foreign country, it shows how little respect they have for the United States," Trump said.

Trump sure was successful in taking attention away from the Democratic National Convention on Wednesday morning.

Immediately after holding the press conference, Twitter and news outlets turned their attention to Trump's comments.

The campaign released a statement from Trump's running mate, Gov. Mike Pence, on Wednesday morning. It said if Russia is responsible for hacking the DNC's servers, "both parties and the United States government will ensure there are serious consequences."

The statement went on to say: "The American people now have absolute and further proof of the corruption that exists around Hillary Clinton. It should disqualify her from office, if the media did their job."

Trump also tweeted shortly after the press conference, "If Russia or any other country or person has Hillary Clinton's 33,000 illegally deleted emails, perhaps they should share them with the FBI!"

This video includes clips from CNN, U.S. Department of State, C-SPAN, Right Side Broadcasting, WikiLeaks, The Kremlin, MSNBC and FOX News and images from Getty Images.