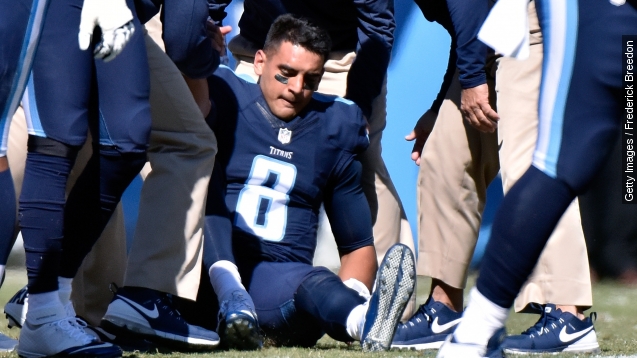 NFL rookies, whose bodies have taken less punishment than their older teammates, seem to be suffering the same injuries. The injuries in Week 6 alone made the 2015 draft class look snakebitten.

Titans quarterback Marcus Mariota suffered a sprained medial collateral ligament in his knee during Tennessee's loss to Miami on Sunday, making him the eighth first-round pick from the 2015 draft to deal with knee ligament damage this season. (Video via Beats Electronics)

Along with the Saints' Andrus Peat, Carolina's Shaq Thompson and the Broncos' Shane Ray, Mariota will deal with an MCL sprain that usually sidelines athletes for around a month, depending on severity. Troublesome, but certainly minor compared to the daunting ACL tear.

No. 3 overall pick Dante Fowler of the Jaguars tore his ACL during the first day of training camp, sidelining him for the entire season. That's a scary proposition for athletes.

Sports psychologist Dr. John Murray told International Business Times, "These athletes their whole life have been refined and tuned up like a great violin to become a great performer. When you miss that, the overall experience can be more devastating emotionally [than physically]."

But somewhat ironically, the NFL's campaign to help player safety by outlawing helmet-to-helmet hits may have caused the spike in knee damage. When players go lower for hits, they can wind up hurting someone's lower body.

Plenty of players have pointed to Rob Gronkowski's 2013 knee injury, in which he tore his ACL and MCL from a low tackle, as an example.

Washington guard Shawn Lauvao told USA Today: "That's because of a rule change. The way it was before, he would have just got hit in the head. He would have been there for the next play."