'Dick Poop' And Everything Else To Discuss About Oscar Noms 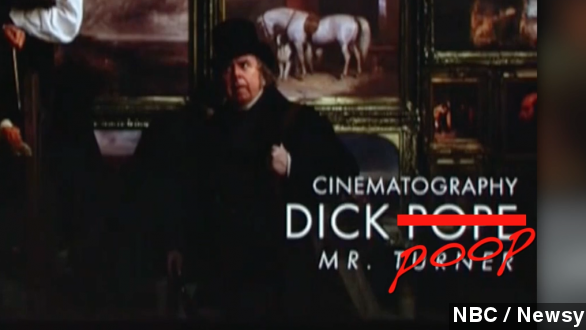 Oscar nominations hit Thursday, but let's be honest: You won't remember most of the nominees. So here's what everyone's actually talking about.

"For achievement in cinematography, the nominees are ... Dick Poop for 'Mr. Turner.'"

Yes ... Dick Poop. That's what the Academy president announced instead of Dick Pope, which is the cinematographer's real name. Cue the tweets. Cue something actually exciting happening at Oscar nom announcements!

Also, the big snubs. "Selma" got best picture but basically nothing else. And if it wasn't worthy of any of the other categories, we must wonder, how did it get a best picture nod?

"The Lego Movie" didn't get a best animated feature nom. Why would we nominate a critically acclaimed box office success? That would make too much sense for the Academy.

Rosamund Pike got nominated, but nothing else. David Fincher, this was no "Social Network." Sociopath network, maybe.

And hey, ladies! The female categories got a little weird at the end of awards season noms here.

Jennifer Aniston will not have her "Cake" and her Oscar nom, too. The Academy was not there for you, Jennifer! (Video via NBC / "Friends")

Instead, some surprise noms — Marion Cotillard for a movie we've never heard of and Laura Dern for "Wild," a movie that's picked up surprising steam, considering no one has seen it.

Tweet me and let me know your thoughts on the Oscar nominations. Also welcoming any good "Dick Poop" jokes.

Personally, I'm most excited about "Whiplash" and "The Imitation Game," which both got best picture noms. Check out our "Thanks for Watching" review of both movies.