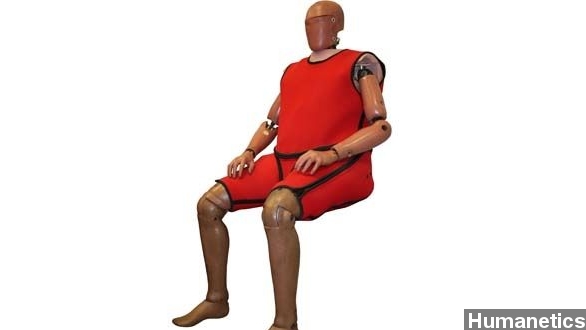 SMS
Developers To Use Obese Crash Test Dummies
By Madison Burke
By Madison Burke
November 1, 2014
Obese crash dummies will soon be used to test the safety of vehicles in the U.S., but the fact that they are needed is pretty concerning.
SHOW TRANSCRIPT

America's obesity epidemic has led to an unexpected side effect — a company is producing obese crash test dummies to correctly predict crash outcomes.

Crash dummies developer Humanetics has announced it is packing on the pounds on some of its models because humans are getting larger.

Humanetics says it made this decision after studies showed obese drivers were more likely to die in car crashes. It says automakers need to test their cars with larger dummies to ensure vehicles are safe enough to drive.

The Centers for Disease Control and Prevention defines anyone with a BMI over 30 obese. So, the larger crash dummies are more than just a little overweight.

While most would probably agree it's good thing the industry is making safety adjustments, the fact it even has to is concerning.

The long list of health risks associated with obesity include heart disease, cancer and metabolic syndrome — all of which can be fatal.

The obesity rate has nearly doubled worldwide since the 80s and currently more than a third of adults are obese in the U.S.

WebMD cites an obesity expert who referred to being overweight as "the new normal" nationwide.

Humanetics says it is also working on developing dummies that mimic the body structure of the elderly to make sure cars are also safe for older adults.