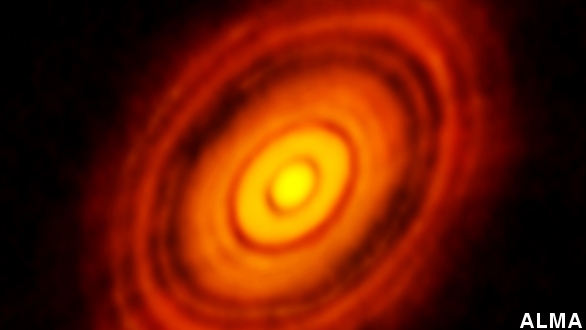 One of the most powerful telescopes in the world is showing off. Scientists at the ALMA telescope in Chile released a new image that has astronomers raving.

What you're looking at isn't an artist's impression, it's an actual image taken of what appears to be planets forming in the disk around a baby star.

Planets form from the dust cloud that's left over after a star forms. The dust slowly begins to clump together into bigger and bigger chunks, eventually forming planets. It's a lot like how Saturn's rings keep churning out new moons. (Video via NASA)

At least that's the prevailing theory. Turns out it's kind of hard to put theories of planetary formation to the test, because you need clear images of good examples.

Which brings us back to ALMA's contribution. It's by far the best look scientists have gotten at a system right in the middle of forming planets. (Video via ESO)

Scientists and science writers on Twitter called the image "astonishing" and an astrophysicist told the BBC it was "phenomenal."

The image is impressively detailed, especially considering the star is 450 light years away and surrounded by a dust cloud. In fact, why don't we let the researchers at ALMA tell us how impressive it is?

NRAO: "The first time I saw this image, I thought it was actually probably a simulation. It was just way too good."

ESO: "The resulting image exceeds all expectations, and is sharper than images routinely obtained by the NASA-ESA Hubble Space Telescope."

The press release accompanying the photo makes that "better than Hubble" point several times. Looks like they're really trying to drive home how powerful ALMA is.

The telescope is made up of 66 huge antennas that can be scattered up to 16 kilometers apart to create a fine image.

The planet formation image was taken with the antennas 15 kilometers apart, almost at their full range, so it's kind of a demonstration of ALMA's capabilities.

But there are also lessons to be learned from the photo itself. Peer-reviewed studies haven't appeared yet, but the ALMA team says they've already learned something: stars that young aren't supposed to be forming planets at all.

The telescope could actually produce even sharper images, at least at different wavelengths, so it'll be interesting to see how ALMA flexes its muscles next.

This video includes images from ESO and ALMA.