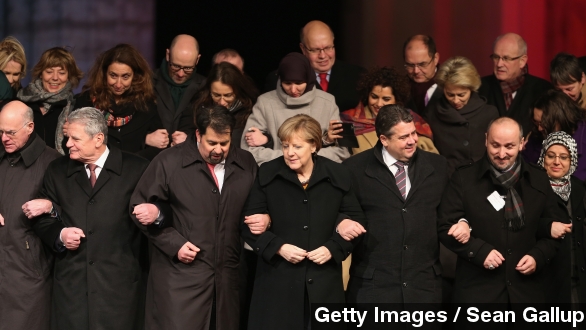 Berlin saw a major rally for tolerance Tuesday night, with Chancellor Angela Merkel and President Joachim Gauck linking arms with leaders from the country's Muslim, Christian and Jewish communities in a candlelight vigil.

The vigil to honor those killed in the France terror attacks carried a message of unity in the face of other rallies by nationalist groups which were out in force earlier in the week, protesting what they called the Islamization of Europe. (Video via Press TV)

Those rallies swelled in the wake of the attacks, with one group — Patriotic Europeans Against the Islamization of the West — attracting most of the attention.

Merkel has spoken out against the group, known as PEGIDA, previously. A day before Tuesday's vigil she said she agreed with former German President Christian Wulff, who in 2010 said, "Islam is a part of Germany." (Video via ARD)

But Merkel is facing divisions within her governing coalition, and from her party, the Christian Democratic Union's sister party in Bavaria.

There, the Christian Social Union is pushing for tougher laws on immigration — they want to make it easier to deport asylum seekers who are rejected and last month proposed immigrants to Germany should only speak German at home. (Video via Deutsche Welle)

But even the CSU has turned its back on PEGIDA, despite the group seeing its biggest protest numbers ever at a rally in Dresden earlier this week. (Video via BBC)

RT's Peter Oliver explained, "The numbers have risen, but they've risen particularly only in one city: that's the city of Dresden ... If they were to try to put on the type of meeting we've seen in Dresden here in Berlin, well I think you'd find that got shut down pretty quickly."

According to Deutsche Welle, a Berlin PEGIDA rally of 400 people was dwarfed by thousands of counter-protesters. And in Leipzig, more than 30,000 people turned out to counter a demonstration of fewer than 5,000 PEGIDA supporters on Monday.

For her part, Merkel has been criticized by PEGIDA for perceived laxness when it comes to admitting refugees — with 200,000 the expected total of asylum seekers for 2014, up more than 100,000 in the last two years.