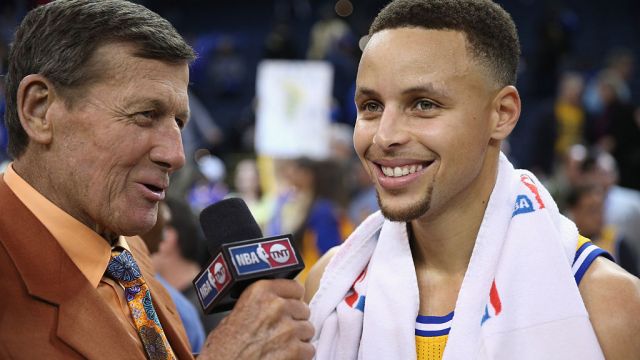 Veteran sideline reporter Craig Sager will be in action for Game 6 of the NBA finals on Thursday.

The long-tenured personality, known for his gaudy outfits and easygoing attitude, has never worked an NBA championship series in his 34-year career because his home network, TNT, doesn't air the finals.

Thanks to a special agreement between Turner Sports and ESPN, Sager will get a chance to add the honor to his resume as he continues his well-publicized battle with leukemia.

Sager missed most of the 2014 NBA season to undergo treatment. He returned to the sidelines in March 2015 after receiving a bone marrow transplant from his son.

In March 2016, Sager stunned the basketball world again when he told HBO's "Real Sports" that his cancer was no longer in remission.

"How are you feeling today?" Bernard Goldberg asked.

"Still kicking, still fighting. I haven't won the battle. It's not over yet. But I haven't lost it, either," Sager replied.

After the finals announcement, Sager said: "I'd like to thank Turner and ESPN for approaching me with this tremendous opportunity to be part of The Finals broadcast team. ... I look forward to being in the building for what will be an incredibly exciting Game 6."

ESPN plans to honor Sager with the Jimmy V Perseverance Award at this year's ESPYS in July.

This video includes clips from HBO and images from Getty Images.