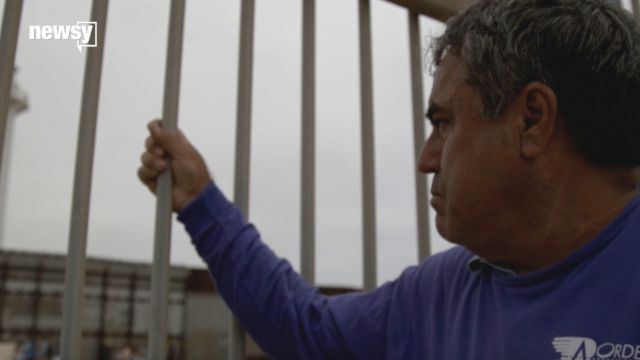 We're standing in the U.S., but right behind us? That's Mexico. This is Friendship Park, where families separated by deportation see each other, often for the first time in decades.

"What brings you to Friendship Park?"

"It had been a while since I saw my dad," Fernando Alvarez said. "Around 15 years. Of course, it's good. I can't cross the border, but seeing them after all this time, I'm grateful."

"One family can't cross one way. The other family can't cross the other way, so this is where they meet," said Enrique Morones, founder of the Border Angels organization, which plans events for families at Friendship Park. "And they talk about, 'Oh, I want to introduce you to my grandchild,' or 'I haven't seen my mom in 20 years.'"

There's been a sharp increase in deportations during the Obama administration. And many of those deportations separate families. In 2013 alone, documents showed more than 72,000 people with U.S.-born children were deported out of the U.S.

"Friendship Park, to me, is the heart and soul of this issue," Morones said. "Friendship Park was inaugurated in 1971 by first lady Pat Nixon. Back then, there was no wall. When your forefathers and foremothers came from Europe, there was no illegal way to come. People just came. Now, today, there's no legal way for most people to come."

"A lot of people, they don't see it — what it means to be separated," Rosa Alvarez told us. "If they come here and see how much it means to people, even through the little holes, it's something."

"We should be working with our neighbors, with our neighbors to the north and the south to create more opportunities in those countries, especially in the south, so that people won't leave," Morones said. "They don't want to leave. They don't leave because they want to. They leave because they have to, just like the people that came to this country a couple hundred of years ago."