Democratic Party Ready For Other 2016 Candidates 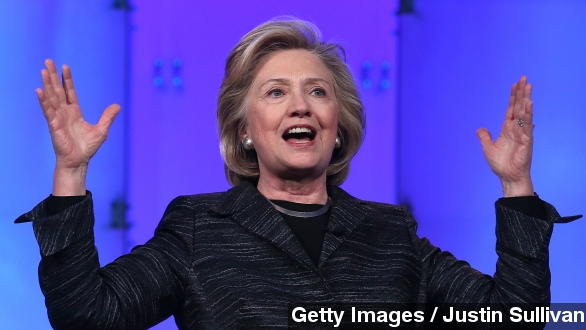 SMS
Democratic Party Ready For Other 2016 Candidates
By Kate Grumke
By Kate Grumke
March 7, 2015
Democratic leadership is starting to look around for other potential candidates after frontrunner Hillary Clinton had a rocky week.
SHOW TRANSCRIPT

A rough political week for Democratic presidential hopeful Hillary Clinton has the Democratic Party reconsidering the wisdom of having all of its eggs in one 2016 basket.

Revelations that Clinton conducted her U.S. Secretary of State business on a private email account added to the controversy that was already swirling over the Clinton Foundation accepting donations from foreign governments, including Kuwait and Saudi Arabia.

Now, many Democrats are looking around for potential alternatives to Clinton, especially in a race that is sure to have even more controversy and scrutiny.

A member of the Democratic National Committee told The Washington Post, "Nobody down here wants a coronation. We need options. Who knows what could happen. It’s always good to have more than one candidate running.” But so far, no one has really stepped up.

"And Hillary Clinton, out there alone, with no real credible contenders for the nomination," said MSNBC's Rachel Maddow.

"Some political observers wonder if the controversy leaves an opening for any other potential democratic candidates to challenge Clinton's expected run for president," reported CNN.

This week, former Maryland Governor Martin O'Malley announced he would not run for an open Senate seat in 2016, which led many to speculate that his sights are set on the White House instead. He has said he'll make an announcement by spring.

"Hillary's not worried. I mean, who's going to go from being totally unknown to beating her for the presidency?" said Jimmy Fallon.

While it's true that O'Malley doesn't have the name recognition that Clinton has, there are rumors that more recognizable Democrats are considering presidential bids — namely Vice President Joe Biden and Senator Elizabeth Warren.

But Clinton is still the easy frontrunner in the polls. And while other potential 2016 Democrats would provide a safety net in the event of more Clinton trip-ups, having more primary candidates isn't always necessarily a good thing.

But in 2008, when Clinton was still in the race, then-candidate Barack Obama's strategist David Axelrod told Politico, "[Obama] is a stronger and better candidate for having had to struggle."

Maybe Clinton would also be stronger with some friendly competition for 2016.