Democracy Spring Completes Its 10-Day March Against Money In Politics 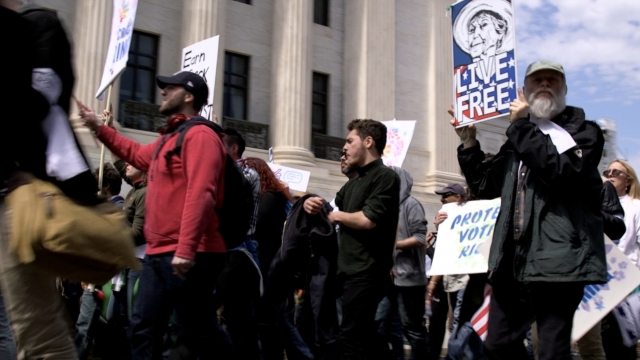 SMS
Democracy Spring Completes Its 10-Day March Against Money In Politics
By Zach Toombs
By Zach Toombs
April 12, 2016
Pushing for campaign finance reform, hundreds of people marched to the U.S. Capitol on Monday and were arrested.
SHOW TRANSCRIPT

Ten days ago, Democracy Spring started their march protesting money in politics in Philadelphia. About 130 miles later, they're here in front of Union Station in Washington, D.C., about to complete that march to the U.S. Capitol and risk arrest.

"Our march was 10 days long, about 140 miles from Philly to D.C.," Elise Whitaker, an organizer, said. "It was really powerful. We had about 150 full-time marchers who made the whole trek with us and a number of other folks who joined us for a day here or there. It was huge, it was powerful, it was wonderful."

"I'm willing to risk arrest because I think money in politics is the No. 1 issue facing our country today," Lauren Windsor, host of "The Undercurrent" and a participant in Monday's march said. "You've seen money in politics become such an explosive issue with Donald Trump and Bernie Sanders."

They're sitting in. They're about to be arrested. Capitol police just gave a third and final warning, they say. Now the 300 or 400 people who are sitting on steps as part of this protest are being picked off one by one by Capitol police and being put into this bus over here.