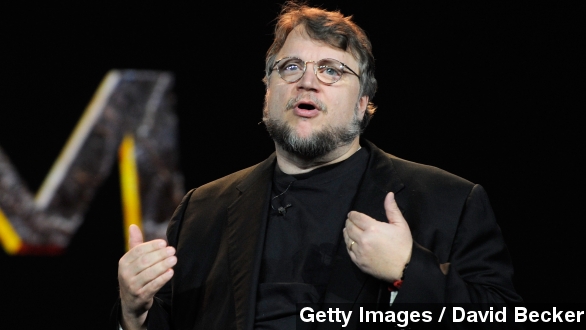 SMS
Del Toro Gives Up On Movie, Moves 'Carnival Row' As Series
By Ben Lawson
By Ben Lawson
January 9, 2015
After years of failing to get his project "A Killing On Carnival Row" made into a film, Guillermo del Toro is writing it as a TV series for Amazon.
SHOW TRANSCRIPT

After years and years of Guillermo del Toro trying to get his passion project "A Killing on Carnival Row" off the ground as a feature film, the acclaimed director decided to take it to Amazon as a TV series.

Del Toro will co-write a script along with "Pacific Rim" writer Travis Beacham. Beacham initially wrote the script as a film back in 2005, but it never managed to go anywhere.

Now The Hollywood Reporter says Amazon has ordered it as a series with del Toro on board to direct the pilot sometime this spring between his film projects.

Del Toro's story is set in a noir, Victorian-esque city filled with supernatural creatures where a detective is investigating a serial killer.

So from movie to TV, from movie director to TV director. It makes sense, since movie studios have seemed averse to taking risks right now. Think the consistency of superhero movie successes, but television is turning it into a happy alternative for filmmakers to find critical success.

This last year alone has proved huge for TV with huge amounts of buzz surrounding shows like HBO's "True Detective" and FX's "Fargo."

And another HBO show, "Game of Thrones," has proved genre fare comparable to the work del Toro's known known for can not only be a ratings success but an awards show giant.

Amazon has already found critical acclaim with its original show "Transparent," but "Carnival Row" will be its first foray into a genre show that will likely require a hefty budget.

Netflix is probably Amazon's most comparable rival. And "Marco Polo," the company's most expensive try at original programming so far, didn't go so well. That show earned pretty disappointing reviews.

And Amazon has seemed cautious with programming commitments after it canceled its series order for Chris Carter's "The After."

But this project could be great for Amazon, especially with a big name attached. Even though it was expensive, "House of Cards" has done well for Netflix with David Fincher, Kevin Spacey and Robin Wright on board.

And Amazon has made it clear it plans to become a top contender against Netflix and Hulu in video streaming.