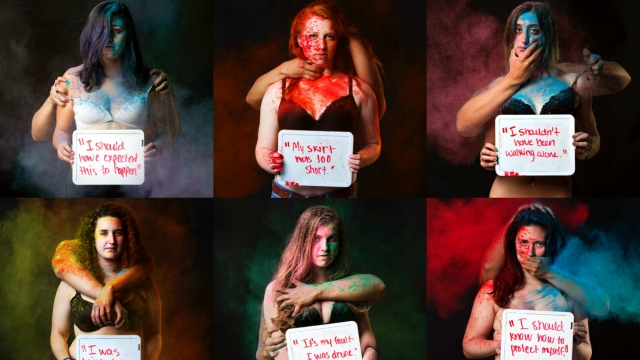 SMS
'Dear Brock Turner' Photos Shed Light On Victim Blaming
By Katherine Biek
By Katherine Biek
June 30, 2016
The photos, taken by Yana Mazurkevich, were released in response to a recent case of a former Stanford swimmer who was found guilty of sexual assault.
SHOW TRANSCRIPT

A new photo series is examining sexual assault and a culture of victim blaming.

The photos, taken by photographer Yana Mazurkevich, were released in response to the recent case against a former Stanford University swimmer who was found guilty of sexually assaulting an unconscious woman in January 2015.

SEE MORE: "Here's Why It Took So Long For Us To See A Mugshot Of Brock Turner"

Brock Turner could've received a maximum sentence of 14 years in prison but in early June, a California judge sentenced him to only six months in a county jail and probation.

That was widely criticized for being too short of a sentence, and a Change.org petition was started in an effort to get the judge, Aaron Persky, removed from the bench.

Mazurkevich's photo series is titled "Dear Brock Turner" and features women holding whiteboards with statements written on them such as: "I should have expected this to happen" and "My skirt was too short."

Those statements are similar to ones made by Turner and his father during the trial.

Mazurkevich told USA Today, "I wanted to portray what rape victims hear and most often blame themselves for when in reality it is never, ever their fault."

The photographer also noted she used the paint covering the women in the photos to symbolize the "unexpected nature of sexual assault."

Mazurkevich is an in-house artist for Current Solutions, which is a group spreading awareness about gender-based violence and sexual assault.

Current Solutions paired Mazurkevich's photos with quotes from Turner's victim's court statement, providing a stark contrast between the two. To see the entirety of the photo series, head on over to Current Solutions' website.