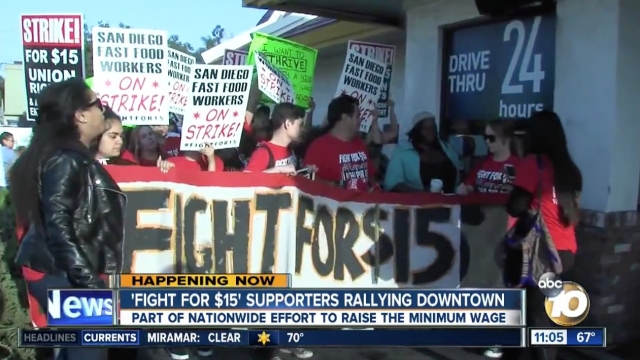 California lawmakers and labor groups reached a tentative deal Saturday to raise the state's minimum wage to $15 an hour.

Gov. Jerry Brown is expected to make a formal announcement soon, but anonymous sources reportedly close to the negotiations have confirmed the deal.

However, the governor can reportedly stop those increases if the economy falls into a bad recession.

California already has one of the highest state minimum wages in the country. If this deal doesn't pass, an initiative to raise the minimum by the same amount by the year 2021 will appear on the statewide ballot in November.

Many Californians have argued the current minimum isn't a "living wage." Expenses, such as housing, are among the highest in the country and rising.

Opponents say the extra money needed to raise the minimum wage would come from less employment, reductions in profit margins or price increases.

And that last one could make the new minimum wage "unlivable" once more.

This video includes clips from KGTV, Al Jazeera and KERO.