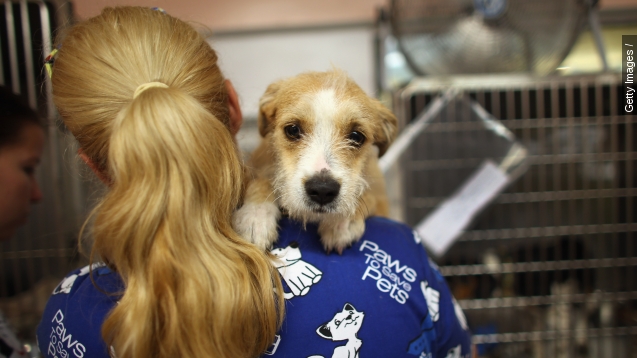 SMS
Deadly Dog Flu, Known As H3N2, Spreads Beyond Midwest
By Becca Dunn
By Becca Dunn
May 19, 2015
The dog flu, also known as H3N2, that infected more than a thousand canines in Chicago, has spread throughout the country.
SHOW TRANSCRIPT

Known as canine influenza or H3N2, the contagious respiratory virus that sickened thousands of dogs in Chicago has spread.

Cases of canine flu have also recently been reported in Texas and Ohio, and NBC reports the flu is suspected in Wisconsin and Indiana, as well.

"Her cough had turned from a dry, hacking cough to more of a moist cough," Houser said.

That puppy came from a breeding facility, and Houser is concerned more could be infected.

"They have at last count 130 breeding adults. ... And we don't know where all of these puppies have gone," Houser said.

Experts differ on whether the H3N2 strain of dog flu is something we should worry about.

"How concerning is 1,000 dogs coming down with the flu?" asked a CBS reporter.

"Very. Especially if it's within a certain period of time. That is very, very ... that's frightening," a veterinarian replied.

"It is an epidemic. It's not, however, something that people should panic about," said Douglas Aspros, former president of the American Veterinary Medical Association.

LiveScience reports this dog flu is different from the previous one that's been spreading since 2004. There is a vaccination for the previous flu, but experts don't yet know whether it will protect animals from this new strain. (Video via WXIA)

Pharmaceutical companies have started to create a new vaccine, but it won't be available for another four to six months.

Until then, some "commonsense measures" are suggested to prevent the virus from spreading: Keep your dog on a tight leash, avoid areas where a high number of dogs live, and if your dog is sick, keep it home.

The virus doesn't seem to infect humans, but we can spread it, so dog lovers are encouraged to wash their hands frequently.