Dead Guys Throw The Punches In A Scientific Showdown 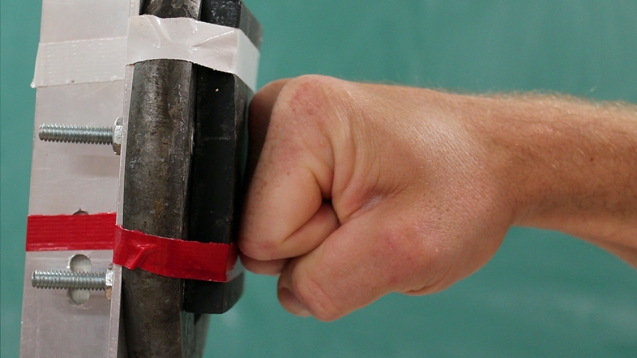 SMS
Dead Guys Throw The Punches In A Scientific Showdown
By Steven Sparkman
By Steven Sparkman
October 21, 2015
To test a controversial theory that human hands evolved for punching, a University of Utah biologist enlisted the help of male cadavers.
SHOW TRANSCRIPT

If a biologist wants to add a whole new controversial chapter to the story of human evolution, it's going to take some persistence and thinking outside the box. Rigging up dead guys to punch steel plates is taking it pretty far, though.

For this to make sense at all, we have to give you some backstory. University of Utah biologist David Carrier has been arguing for a few years now that good ol' fashioned male-on-male fisticuffs played a role in shaping modern human anatomy. (Video via KSTU, Library of Congress)

He argues there were many ways human hands could have adapted to become better at using tools than our ape cousins, but only one that would make us better punchers. Therefore, hands must have evolved so males could duke it out over females, food or for social standing.

To test this, an earlier study had martial artists hit a punching bag as hard as they could using different hand positions. Hitting with a clenched fist didn't prove any more powerful than slapping, but his findings did suggest it put less stress on the bones of the hand.

So now we're back to the dead guy study. Carrier reasoned that, even if humans can't hit harder with a clenched fist, if we can at least punch with less chance of breaking our own hands, that would support his theory.

So he and his students took the arms of eight male cadavers, shaped them into open or closed hand positions, put them in a swing contraption and sent them flying at padded steel plates a few hundred times. The caption on a photo was careful to point out that these demonstrations show a living person's hand.

The results show that less stress was transfered to the bones of the hand with a closed fist shape than with an open palm, which is what the punching theory predicts.

Carrier's work has gotten a good bit of media attention. For one thing, it has all kinds of implications about who we are as a species.

If wailing on each other was such a key part of life that it helped shape the human hand, it means human ancestors were more violent and less cooperative than we thought. And Carrier has embraced this idea, saying in 2012, "We're the poster children for violence."

It's scientifically controversial, too. Critics accuse Carrier of making big claims from little evidence, with one evolutionary biologist telling the Los Angeles Times it's like "arguing that human speech evolved so that humans could more effectively lie to each other."

But Carrier doesn't shy away from his critics. He addresses their points in scientific journals and even in the comments section of science blogs. He's also quick to point out he isn't claiming aggression was the main driver of human evolution, just that it played a role.

It'll definitely be interesting to see how the scientific community responds to him bringing dead guys' arms into the fray, though.