De Blasio Calls For Pause In Protests After NYPD Killings 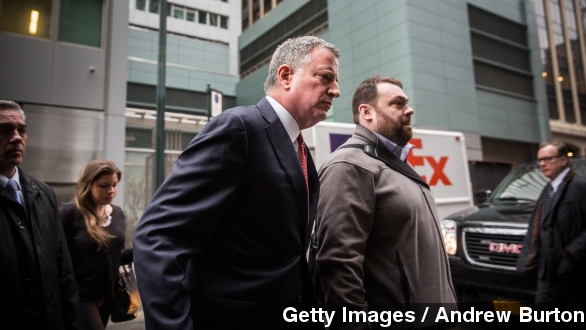 It's not a formal ban on protesting, but New York City Mayor Bill de Blasio is asking for protests against police violence to be put on hold after two NYPD officers were ambushed and killed Saturday.

"I think it's a time for everyone to put aside political debates, put aside protests, put aside all of the things that we will talk about in due time."

At a police charity luncheon de Blasio asked for a pause in protests and political debates, and for New Yorkers to focus on the grieving families of the two murdered officers.

It's a sentiment echoed by other top New York officials, including Gov. Andrew Cuomo, who told WNYC "I think it's time for a societal deep breath. I think we need a cooling-off period."

According to the NYPD, 28-year-old Ismaaiyl Brinsley shot and killed officers Wenjian Liu and Rafael Ramos as they were sitting in their police cruiser, before taking his own life.

Social media posts attributed to Brinsley show he was angry about the much-publicized deaths of Michael Brown and Eric Garner at the hands of police officers. Those deaths have sparked public protests against police violence across the nation.

After the murders, de Blasio was slammed for publicly expressing sympathy for the protesters. The mayor's critics, including the heads of New York's police unions, say de Blasio's lack of support for the NYPD led to this shooting.

But police commissioner Bill Bratton defended his boss in a press conference Monday.

"Do some officers not like this mayor? Guaranteed. Some officers don't like me. ... The experience of this mayor, in terms of some cops not liking him, is nothing new. It's part of life, it's part of politics."

Authorities are still investigating the shooting and are seeking the public's help to track Brinsley's movements. De Blasio also warned New Yorkers to be alert for any other potential threats to police officers in the wake of the shooting.