DC Comics' New Take On Scooby-Doo Is Something, That's For Sure 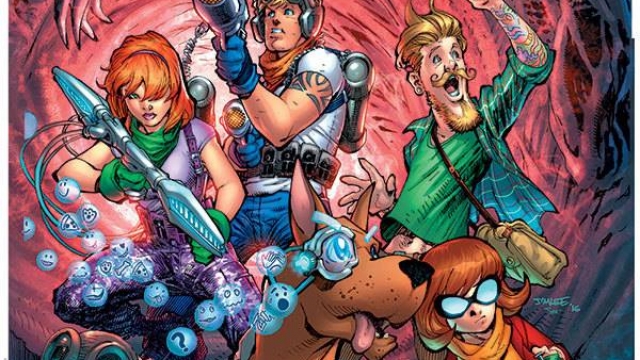 DC Comics has decided it's time to revamp some beloved Hanna-Barbera characters: Scooby-Doo, The Flintstones, Jonny Quest and Space Ghost. (Video via CBS / "Scooby-Doo, Where Are You?")

But we're talking about Scooby-Doo and the gang. A cartoon that was created way before emoji even came into the picture. (Video via CBS / "Scooby-Doo, Where Are You?")

But you'd never know that based on the new image released by DC Comics.

The image features totally new looks for the five members of Mystery Inc. Most notably, our goofy Shaggy is more of a hipster Shaggy with a tattoo sleeve, handlebar mustache, stretched ears, and a murse.

Fred also has tats. Oh, and Scooby has a bionic eye with weird emoji bubbles floating around him.

On top of all the appearance changes, the new plot centers around the kids taking part in an experiment that has gone awry. It's up to them (per usual) to battle real mutated creatures who have been infected by a virus — aka zombies. They're battling zombies now.

The famous cartoon has gone through some makeovers over the years, but the characters have largely remained true to the originals. Until now.

And fans are split. Die-hards, like myself, of the original cartoon are ready to fight the good fight, while other comic book fans are excited.

And maybe they'll prove us Scooby purists wrong. After all, look at Image Comics' success with its zombie-riddled series "The Walking Dead."