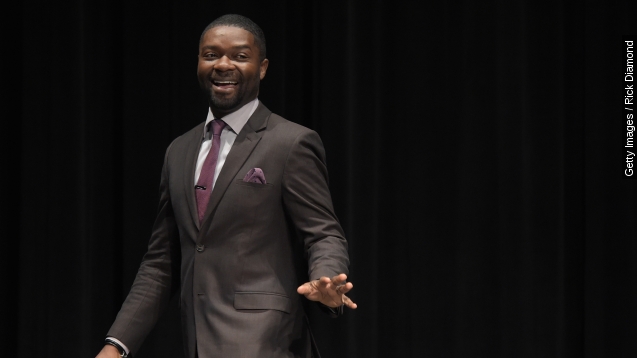 The announcement that British actor David Oyelowo will narrate an upcoming 007 audiobook means at least two things: The black Bond movement kind of gets a win, and Oyelowo could be the first black actor to voice arguably the most famous Bond girl — Pussy Galore.

Of course, one of those things seems to be a hotter topic than the other.

Oyelowo will voice Bond, Pussy Galore, new Bond girl Jeopardy Lane and others in the “Trigger Mortis” audiobook — a job the book’s author thinks Oyelowo is suited for. Writer Anthony Horowitz said in a statement, “[Oyelowo] has a brilliant voice and talent for bringing out the nuances of dialogue and characters."

Oyelowo is only the second black actor to voice Bond. In the excitement over the new "black Bond," some fans might've glossed over Ghanaian-born British actor Hugh Quarshie, who narrated a 2012 "Dr. No" audiobook. (Video via Eclipse Theatre Company Ltd. / "Black Magic")

Still, it's uncertain how many actors have been specifically asked by the estate of Bond creator Ian Fleming to portray 007. The Guardian reports Oyelowo has that honor. He said in a statement, "I get to play James Bond! It doesn't get much better than that."

No matter how many characters Oyelowo will bring to life, his presence on this project will surely stoke discussion around the first black actor to play Bond on screen — whether it's Oyelowo or the widely suggested Idris Elba.

"Trigger Mortis" is set to be released Sept. 8.

This video includes images from Getty Images and Birocratic / CC BY ND 3.0.