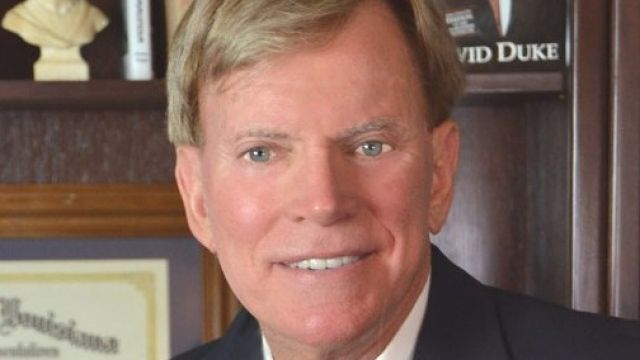 As if 2016 couldn't get any more bizarre, this former Ku Klux Klan grand wizard will debate at a historically black university.

David Duke is running for the U.S. Senate in Louisiana and is currently polling at about 5 percent. His poll numbers make him eligible to participate in a debate at Dillard University.

The university agreed to provide the facility for the debate late last month, before the participant list was determined. The debate isn't open to the public and is hosted by a local TV station.

Dillard said in a statement it doesn't endorse any of the candidates participating, and like every other event, it will work with the host to "ensure that the event is secure and managed professionally."

After finding out he made the debate cut, Duke tweeted, "I can't wait to tell truth nobody else dares!"

Duke served one term in the Louisiana State House. He was the Republican nominee for governor in 1991, but he lost to Democrat and three-term Gov. Edwin Edwards.

The Southern Poverty Law Center describes Duke as "the most recognizable figure of the American radical right, a neo-Nazi, longtime Klan leader and now international spokesman for Holocaust denial." Duke founded the Knights of the Ku Klux Klan in 1975.