Data Thieves, Beware: T-Mobile's CEO Is Coming After You 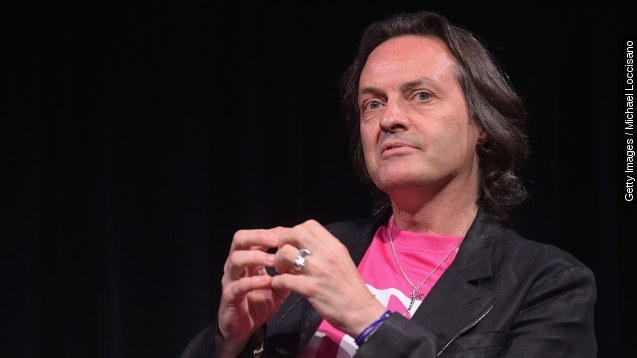 In T-Mobile's blog, he wrote, "This week, I am taking aim at a select group of individuals who have actually been stealing data from T-Mobile."

It's really just a small group of people — about 3,000 T-Mobile users — but each of them hogs thousands of gigabytes of 4G LTE data every month. The average smartphone user usually only racks up about 1.8 gigabytes of data each month. (Video via T-Mobile)

And though the company does offer unlimited data, and even tethering up to a certain amount, the users in question are apparently using unauthorized tools to share their phones' data with other devices.

"I'm going after these people, and I'm going to start individually contacting them — explain to them what they're doing to screw up things for everybody. We're going to take action against them," Legere said on Periscope.

Legere's talking about a cell tower's ability to handle tons of users at the same time. If everyone is using a reasonable amount of data, it's no big chore. But if one person is using too much data, everyone else's experience might get slower. (Video via T-Mobile)

Questions about net neutrality and data-throttling are bound to come up — in fact, the terms have already been thrown around on Twitter — but Legere says, "This is not the same issue."

The biggest issue appears to be over what "unlimited" means and if that includes the data used through non-certified means. (Video via T-Mobile)

Legere believes unlimited data ends right here — on the device. But I can think of about 3,000 people who probably think otherwise.