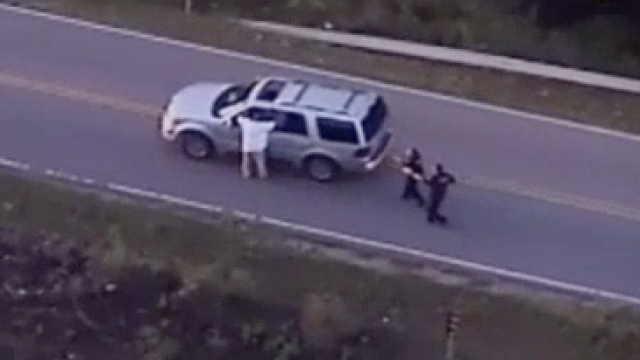 The Tulsa Police Department released footage of an officer-involved shooting that killed an unarmed black man on Friday.

A department spokesperson said Terence Crutcher refused to comply with orders to put his hands in the air, but the video shows his hands were raised before he was shot and killed.

None of the officers had body cameras, but dashcam footage shows officer Betty Shelby with her gun drawn on Crutcher. He walks to his car with his arms raised before being shot once.

Tulsa Police Chief Chuck Jordan said, "The video is very disturbing. It’s very difficult to watch." He added Crutcher did not have a weapon on his person or in his car.

The Department of Justice launched a civil rights investigation into the shooting. Crutcher's sister said she hopes the officer who pulled the trigger stands trial.

"We're demanding, today, immediately, that charges are pressed against this officer that was incompetent that took my brother's life," Tiffany Crutcher said.

Police-involved shootings have been a hot-button issue, with protests breaking out after shootings in places like New York City, Milwaukee and Baton Rouge, Louisiana.

About a dozen people gathered outside the Tulsa courthouse to protest the shooting. Local pastor Mareo Johnson called for any additional protests to remain peaceful.