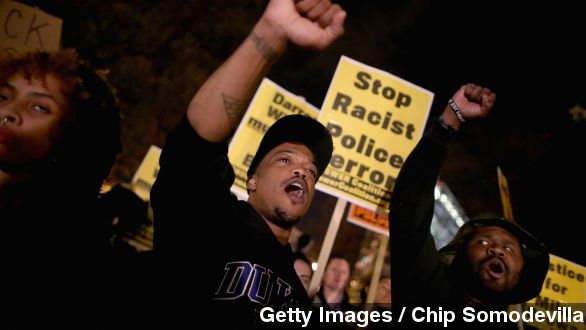 A second night of nationwide protests is underway. And as more events pop up across the country, the man at the center of it all spoke out publicly for the first time.

"You have a very clean conscience," ABC's George Stephanopoulos said.

"The reason I have a clean conscience is because I know I did my job right," Officer Darren Wilson replied.

That was Officer Darren Wilson, cleared of wrongdoing by a grand jury Monday evening, then the subject of an exclusive ABC interview aired Tuesday evening — the rest of which airs on Good Morning America on Wednesday.

The bulk of Tuesday's segment covered Wilson's retelling of his encounter with the black teenager he shot, Michael Brown.

"Is there anything you could've done differently that would've prevented that killing from taking place? Nothing?" Stephanopoulos asked.

And while the scene in Ferguson didn't reach the chaos of the previous night, protests in solidarity in major U.S. cities picked up steam. In Boston, around 1,000 peaceful demonstrators gathered.

In Minneapolis, the StarTribune captured video of a driver plowing through protesters and partially running over someone's leg before being attacked by the crowd.

And in New York, demonstrators caused both sides of the FDR East River Drive to shut down and blocked traffic at the Lincoln Tunnel and Times Square.

Back in Ferguson, Missouri Gov. Jay Nixon has called in National Guard troops to try to avoid a repeat of Tuesday's looting and property damage.