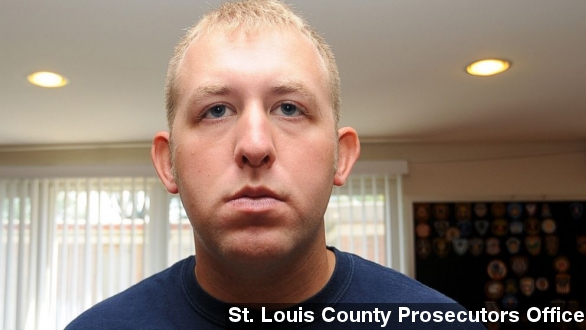 We now know he won’t be indicted on criminal charges, but Officer Darren Wilson is still the subject of a federal investigation.

“I stand by what I did. I stand by my training,” he told ABC’s George Stephanopoulos.

But the 28-year-old doesn’t think that federal Department of Justice civil rights probe will come to a different conclusion.

So here’s what we know about Darren Wilson’s future: He is still — technically — an officer with the Ferguson Police Department, on administrative leave. But his lawyer told CNN’s Erin Burnett:

“There’s no way in the world he can continue to be a police officer. … It’s not a question of if, it’s just a question of when. … It’s only a matter of time,” Neil Bruntrager said.

Only a matter of time, because while protests have become peaceful — there’s still a lot of anger. (Video via The New York Times)

Which makes Wilson’s stated wish for a “normal life” hard to imagine in the short term future. Meanwhile, we know he had recently gotten married to a fellow officer — and that he and his wife are expecting a baby. In interviews with several sources, his legal team has pretty much all said the same thing: That a future in law enforcement is out of the question for Wilson.

They told KSDK he’ll be looking for a new career, though no indication of what that might be.

But Wilson did tell ABC he hoped to educate other law enforcement officers about the use of deadly force.

He’s currently still in hiding, and one of his attorneys told The Washington Post that location is “quote-unquote permanent.”

As for that federal probe, Attorney General Eric Holder has promised a timely and fair investigation, but he has also acknowledged the bar will be high to prove Wilson violated Michael Brown’s civil rights.

If, on the other hand, Brown’s family decides to pursue a civil case in a state court against Wilson, The Guardian has noted it’s likely the case would be heard in Clayton, Missouri. That’s the same place from which the grand jury decided not to indict him.