DARPA Creates The Tech You Can Only Dream Of 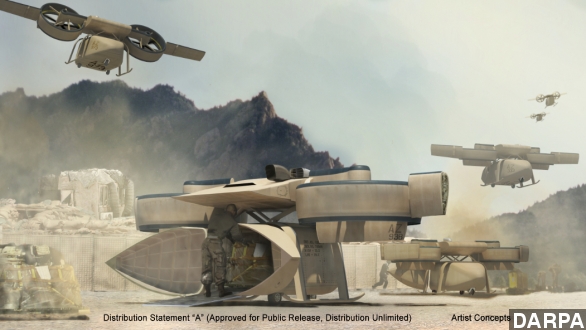 SMS
DARPA Creates The Tech You Can Only Dream Of
By Jake Godin
By Jake Godin
November 20, 2014
Curious what a rocket-dodging car would look like? How about a robotic pack mule? Or maybe a wearable robot? These are a few of DARPA's projects.
SHOW TRANSCRIPT

All very different, yet all tied together by one entity — DARPA, or the Defense Advanced Research Projects Agency.

DARPA was created by Dwight D. Eisenhower after the Soviet Union surprised the U.S. with the launch of the Sputnik satellite in 1958. While not exactly a household name, the agency has had a global impact.

That’s because the creation of the Internet — you know, what you’re watching this video through right now — was spearheaded by DARPA in the late ‘60s and early ‘70s with the ARPANET.

Since then, DARPA has funded hundreds of projects to ensure the U.S. military stays technologically competitive.

An example: DARPA provided Harvard University a $2.9 million grant earlier this year to build a “wearable robot” for what it calls Warrior Web — or improved mobility tech for soldiers.

Arizona State University is working with DARPA on a similar “wearable robot” prototype that uses a combination of gas and pulleys to help a person move faster.

Then there’s Boston Dynamics’ “Legged Squad Support System” — or LS3 — which can carry up to 400 pounds of equipment for 20 miles for soldiers. DARPA has invested almost $50 million in funding for LS3 robots since 2011.

Not all of DARPA’s ideas can be realistically produced quite yet, however. This is a mock-up of DARPA’s “Ground X-Vehicle Technology,” which will use sensors to help ground vehicles dodge attacks.

And then there’s the agency's recent call for ideas on how to transform planes into “aircraft carriers in the sky.”

Or essentially, the Helicarrier from Marvel’s “The Avengers.”

By now you’re probably wondering where DARPA gets all this research money. The answer? The U.S. government — to the tune of around $2.8 billion a year.

The agency’s fiscal budgets, which are readily available on its site, reveal how much of that multi-billion-dollar-pie the agency has invested in its individual programs.

Although, not all of the projects are openly detailed. For 2015, $435 million has been allocated for three classified programs.

But it's worth noting — DARPA has had some duds.

Take, for example, the FutureMAP program. Proposed after the 9/11 terrorism attacks in the U.S., the program would have created a sort of “betting pool” for when the next terrorist attack would occur so it could be prevented.

And the agency is not without controversy.

There’s former DARPA Director Regina Dugan, who left the agency in 2012 for Google amid accusations she unfairly gave contracts to the family business — a bomb detection firm.

DARPA was eventually cleared of the agency-wide probe but still faces scrutiny even now. The Guardian recently highlighted what critics have called a revolving door problem. In fact, the agency was forced to defend a no-bid contract given to an ex-employee.

Still, whether it’s karate-kicking robots, inflatable robotic arms or robotic cheetahs, DARPA seems committed to reminding us that every day we’re living in the future.