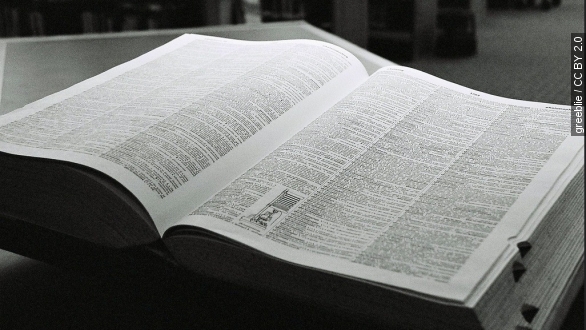 Each year, new words are added to the dictionary. On Wednesday, Dictionary.com didn't just add new words, but also updated the meanings of some already existing ones too.

Out of the thousand-plus new words and definitions added, Dictionary.com included many having to deal with technology, such as "smartwatch," "dark web" and "completionist." That's someone who's completed every single challenge in a video game, by the way. (Video via Apple)

Other new words deal with what gender a person defines themselves as being, such as "agender," "bigender" and "gender-fluid."

And others are just ridiculous, such as "brogrammer," which stands for "a male computer programmer who is characterized as a bro."

And the word "basic" got a whole new definition added.

"Basic means you're just like a plain Jane every day."

"Do they have an iPhone? Are they texting on their iPhone?... Do they have a Starbucks cup? Are they taking pictures of things on the street to Instagram later?" (Video via BuzzFeed)

Yeah, that's about in line with what Dictionary.com has listed as the official meaning of the slang term — "a person, especially a female, who is boringly predictable or unoriginal."

So how exactly do dictionaries choose what new words to add each year?

It all starts with editors scouring publications and the Internet for terms or definitions not already included. If they see a word pop up enough times, they make note of it. (Video via Merriam-Webster Dictionary)

"For every new dictionary or online update, we look at all the most recent terms that have emerged and select those that we judge to be the most significant or important, and those which we think are likely to stand the test of time." (Video via Oxford Dictionaries)

Now we're not real sure why Oxford Dictionaries thought the words "adorbs" and "amazeballs" would stand the test of time back when they were added in 2014. But we won't judge.

Keep expecting to see more slang included in dictionaries, because The Economist says, "They are no longer primarily prescriptive in the sense of granting 'good' words official status while keeping slang and neologisms out."

Newsweek points out one new phrase that didn't make it this time around: "on fleek." Better luck next time, guys.

This video contains images by Getty Images and greeblie / CC BY 2.0.